Every year during this run up to the festive season, I always seem to get pulled back into memories of childhood Christmases. Of course it was a long time ago and things were vastly different then. For a start it was less commercialised: a gentler time where we were far more innocent as children and keen to believe in what was then a magical as well as religious celebration.

Growing up, most of us believed in Father Christmas. I think I must have been six or seven before I learnt the truth.  Unlike us, these days kids know far more at a much earlier age.  They wouldn’t be fooled by tales of a red suited man with a large white beard climbing down the chimney to delivery presents.  During one particular December a girl in my class told us all that she’d actually met and spoken to Santa. I had always wondered how one man with a sleigh and a team of reindeer could possibly bring toys to children all over the world in one night. Magic, I was told, but after she had boasted to the class about this, I wanted to come face to face with the big man and ask him how he achieved this feat.  Of course had he really appeared I’d have probably been too scared to say anything, and hidden under the bedclothes instead! On this particular Christmas Eve, however, I stayed awake only – yes you’ve guessed – to end up being massively disappointed when humans crept into my room to leave presents. Years later, when I was at college, one of our lecturers told us he believed telling his children Father Christmas existed was a terrible thing to do. It was a lie and he didn’t feel comfortable misleading them. Instead he told them we all gave each other presents at Christmas to celebrate the birth of Jesus. I wasn’t sure how I felt about that because although it is a myth, for younger children there’s something magical in believing for a while that this big, jovial bearded man in red and white is real. 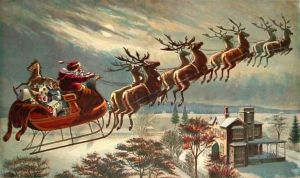 Christmas at junior school meant decorating the classroom with multi-coloured garlands.  The taste of the glue as we created the linked chains, licking the edges of each one before sealing it into a loop, (no self adhesives in those days) has left a lasting memory. When complete, the garlands were hung across the classroom ceiling and along the walls with red paper bells. Although the bells were kept in a cardboard box and used each year, the garlands were thrown away. It meant we had another round of glue licking to look forward to next year. 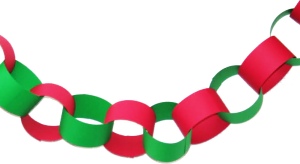 I remember grandmother worked with a German woman called Marta. Every year she would make Advent candle displays and give one to her as a Christmas present.  It was always exciting to light a new candle every week knowing that each flame brought Christmas closer. Her other speciality was a gingerbread house with red paper curtains. Its roof was decorated with Smarties and the walls with silver bobbles and Iced Gems. Picture below in case you have no idea what these are!

Sunday School was held in the Victorian school house in the village. No longer used for teaching, it hosted jumble sales, whist drives and other village events. Every December we would all go carol singing to raise funds for St Stephens, our local church. As we lived in a rural area we would travel in two cars (one driven by the Sunday School teacher, the other by her son) and tour around the local villages singing. Sadly not everyone appreciated our vocal efforts and I remember at least one or two houses where lights went out as we stood by their front door singing. 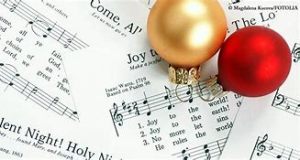 Every year St Stephen’s held a Christmas carol service that villagers and all the Sunday School children attended. Each of us was given a figure or an animal to place in the nativity scene set on a table next to the pulpit.  We also had our own school nativity play, of course, which saw our mother’s busy making costumes.  There was always excitement over which role we would get.  My best was a shepherd, the worst a sheep! 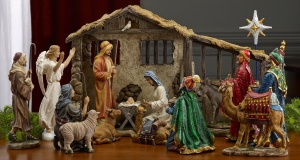 The tree we had lasted several years.  It was replanted in the garden after the festivities.  When it became too large we simply bought another one.  Decorations were mostly tinsel and baubles, although I do remember my grandmother’s tree had red candles on it. They were slotted into small metal holders which clipped onto each branch of the tree. Thankfully the candles were never lit – it was far too dangerous!

The bird on the Christmas menu was goose, not turkey.  My grandfather kept chicken (we sold eggs) and pigs and would raise geese to sell at Christmas.  My grandmother, who was a wonderful cook,  made all the Christmas puddings and cakes and vegetables came from the garden. Food was good, plain and wholesome.  Maybe if we had lived in a town things would have been slightly more sophisticated but village life was all about local produce. There were no supermarkets locally, even in our nearest town. Instead we relied on places like Home and Colonial and International Stores, both now long gone. And as far as a festive tipple was concerned we had sherry, and maybe the odd bottle of whisky to celebrate New Year.  Now I think of the huge selection of food and drink available in the supermarkets I realise how spoilt for choice we all are.

So those are some of my memories of Christmas past. You know, the rose tinted ones which overlook the fact there was no central heating and living on the edge of Salisbury Plain, exposed to the elements, meant snow could cut us off for a couple of weeks during winter months. This resulted in no bus service and the local farmer taking his tractor and trailer across the fields to the next village to get food supplies.  Being such a small community, we had no school, no shop, no post office and no pub. It meant my grandfather occasionally travelling to the next village to  a pub called The Prince of Wales, for a drink. Failing that, he would drink at home. My grandmother was a great wine make -, usually elderberry or dandelion – and her wheat wine was legendary,  Many people said tasted like whisky.

Each December I return to St Stephen’s to place a wreath on my Dad’s grave, and as I look around I realise how much the village has changed over the years. I have no idea how many people lived there when I was a child, but in 2019 there were 157. They  still have no shop, no pub, or school, but that no longer matters. People have cars, they are mobile. Or they can shop on line for pretty much everything they need. The farm has gone, replaced by four large detached houses (one with a swimming pool) and the farmhouse has been completely refurbished. The manor too has seen new build in its grounds and several cottages have been upgraded.  There is a small swathe of council homes, most of them now privately owned and properties have also sprung up on available pockets of land. Despite its size, the place has a modern face. People work from home or travel to the nearest train station six miles away where there is a main line to London.  Now, like many other communities whose families once stayed in their villages for generations, there are few villagers left.  Instead it has become an ‘escape to the country’; a prime location for those seeking a better quality of life – and who can blame them?

This is my penultimate post of this year. I’ll be back just before New Year with my list of favourite reads of 2020.  In January started out with 40 reads as my Goodreads challenge. Completed books currently stand at 66 – blame Coronavirus as I don’t think I would have had as much time to read had things been normal.  Anyway, I plan to list my top ten reads and know it will be difficult choosing as there have been some really amazing books this year.

In the meantime here’s wishing you all a very Happy Christmas and I’ll catch up with you soon.