Yesterday was an opportunity to escape from the writing cave for a while as I’d arranged to meet up with a friend for lunch. It’s a regular thing and our usual meeting place is in Bradford on Avon which is a sort of halfway house for both of us .  Unfortunately it was one of those days when things didn’t quite go to plan.  We both use public transport as it’s easier.  Bradford is a magnet for tourists – Tithe Barn, the Saxon Chapel to name but two of the historical places that draw people here from all over the world.  As my bus reached the outskirts I got a call to say hers had not turned up and she was going home to collect the car.  It would take her around twenty minutes but that was okay, I’d just wait for her in the small restaurant where we usually meet. A table had been booked. No problem. Except that a notice on the door announced the restaurant was closed for redecorating and wouldn’t be reopening until Friday. I’m not sure who took the booking or why seeing the whole place was to be closed all week, but I guess these things happen.

On previous warmer occasions when I’ve waited for her, I’ve settled myself on a bench in the small park opposite to read. Unfortunately today was not one of those days anyone sensible would sit in such an exposed place.  So instead I took refuge in the bus shelter where I gave her a call to relay how our day had just gone from bad to worse.  Eventually she arrived. Predictably the two major car parks were full but happily there were still spaces in the library car park.  We found another cafe in the small shopping precinct and settled ourselves for lunch and a catch up.  A happy ending to our rather chaotic start.

During my wait I decided I’d have a small walkabout and take some photos.  Bradford on Avon is a place I’ve always loved. I spent my senior school years there at Fitzmaurice Grammar School and as you can imagine it was quite a different place then. In those days all shops shut between one and two with Wednesday half day closing.  The town had industry too. Avon Rubber Company, whose head office was in nearby Melksham, owned and ran Spencer Moulton, whose factory bordered the river on one side of the town bridge. It was one of the company’s many divisions, producing among other things, windscreen wiper blades, shock absorbers for railways throughout the world, rubber hose and gaskets.  In 1997 Avon Rubber was taken over by an American company, Cooper Tires and Spencer Moulton closed.  The factory and office buildings have now been turned into luxury flats and housing, restaurants and the small shopping precinct where we had lunch.  The town is also the home of Moulton Bikes, founded in 1962 and still building the iconic cycle. 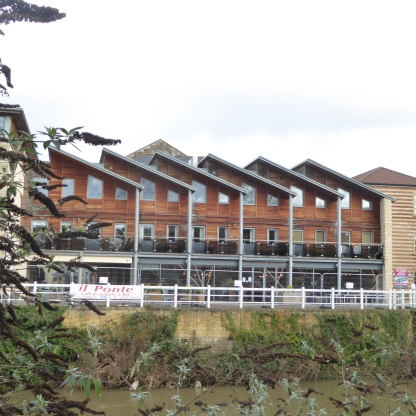 Town Bridge with its Lock Up 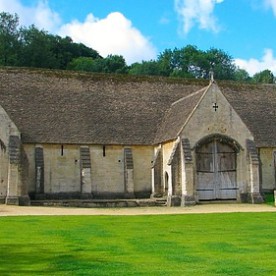 During my school days, swimming lessons were held in the local swimming baths, a Victorian building with a relatively small pool.  My memories are of scratchy woolen bathing costumes and towels that never quite dried you properly – oh and the footbath at the entrance to the pool which we had to dunk our feet in on the way in and out.  The distance from the school provided one of the biggest challenges. We were never allowed enough time between the end of swimming and the beginning of the next lesson – hence the hasty drying and clothes that seemed to stick to every part of your body.  There was a short cut back to the school up St Margaret’s Steps (pictured) which saved a huge amount of time. In those days running in the street was forbidden as was going without your hat.  Both would attract a spot of detention if you were caught. But St Margaret’s Steps were sheltered so no one could see us as we fled up them.  In later years a brand new pool was built in the station car park. The old Victorian baths demolished and a brand new library (pictured) built on the site. 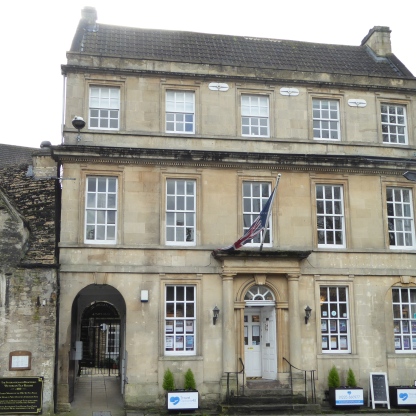 During our ‘O’ levels we would sneak down into the town to the local hotel The Westbury. Back in the 1970s it became a restaurant – The Georgian Wine Lodge – which ran for many years but has since closed and been converted to flats.  If you check out the photo there’s an archway on the left side of the building. This led to a the Westbury’s coffee bar where we would spend our free time listening to the jukebox and drinking Pepsi or Coca Cola.

Fitzmaurice Grammar School closed in the summer of 1980, its pupils transferring to the new St Lawrence Comprehensive the following September. The building lay empty for quite a time after, falling into decay. Happily it was eventually rescued and following the pattern of many other similar buildings in the town, converted to flats.  Good memories and yes, I did enjoy my school days, despite the rules which today’s pupils would probably find quite draconian.