This morning I would like to welcome Tara Melanie Kerr.  Not only  has she written a prequel to Pride and Prejudice, her life is very much involved in all things Regency.  In her words..’sewing her own petticoats and dreaming of Colin Firth.’

First of all, my usual opening question – tell us a little about you 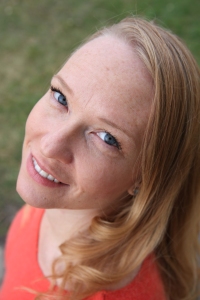 I  studied linguistics, English and theatre at the University of British Columbia and law at the University of Alberta. I am a reckless lover of clotted cream, a staunch defender of the semi-colon and a fierce opponent of unpleasant music.I proudly live in Edmonton, Canada, where I raise my three babies, sew my own Regency costumes, organise Regency costume events, blog on all things old and English, endeavour to take over the world and occasionally practice law. I also write novels inspired by my love of Jane Austen.

When did you first become interested in the Regency Period and Jane Austen?

15 years ago, I was introduced to Jane Austen and the channel for all my interests became clear, for in her work, drama, make-believe and grammar came together in a charming, intelligent and escapist way that captivated my imagination. I have been sewing my own petticoats and dreaming of Colin Firth ever since.

Is there an official society for Jane Austen and all things Regency in Canada?

The Jane Austen Society of North America fills that role in the US and Canada, though they are particularly focused on the works of Jane Austen, and by extension the Regency period. I attend their local chapter meetings here in Edmonton when I can. Otherwise, I think there is basically just me (see answer below).

Earlier this year you organised The Calgary Regency Springtime Ball.  Do you organise many events like this and if so, who attends?

This was actually the third ball I have put on. The first two were in Edmonton, and it was due to their success that we thought we would try expanding to Calgary. Last year, I thought it would be fun to see if I could pull off a Regency costume ball, complete with English country dancing and live music and cards, all in period costume. It wasn’t sure how it would go, but it was so popular, we had to expand into a larger ball room! Since then I have tried other events as well, including a murder mystery and garden promenade under the trade name Regency Encouters (www.RegencyEncounters.com). We are holding another ball in Edmonton this September as well. 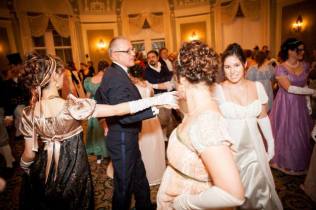 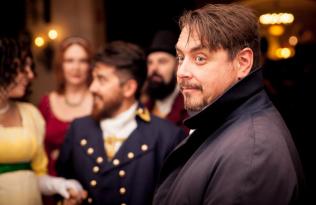 At this event where were the costumes hired from?  And in the case of the ladies were any dresses made by the wearers?

I was really impressed with how people got into the costuming actually. Many people made their own entirely from scratch, and to a really high standard. I have a small stock of costumes from attending the Jane Austen festival in Bath a few times several years ago, and I rent them out as well. People also custom order their outfits from local costumiers. I even had one person order a gown from the UK. Although dress code is strictly Regency, I allow anything that comes close, including reinvented modern clothing, and I post videos on my YouTube channel (https://www.youtube.com/channel/UCIn1Mil6l-w4f3pPD9wm6WA)of how to get a Regency look without any sewing skill or budget.

You have written a prequel to Pride and Prejudice – Follies Past.  What made you decide to undertake a project like this?

Essentially, it was a book I wanted to read. I had tried reading a few of the more popular Fan Fiction novels, and they just were not what I was looking for, so I decided to write it myself. One of the great things about Jane Austen’s storytelling is the way she ties everything up into a deeply satisfying ending. We all want the books to go on and on, but extending the characters and the plot after the final chapter felt to me like interfering with that perfect ending. And it would all have to be speculative. Nobody knows what happens after the close of a book, but Jane Austen herself tells us what happened before Pride and Prejudice. In Darcy’s letter to Elizabeth, setting out all his dealings with Mr. Wickham, Austen gives us that history, and on that foundation, I built my novel, Follies Past.

I thought if I extended the story backwards in time, I would be able to explore more of her world, spend more time with her characters and create the experience I longed for as a reader, but without offending anyone’s ideas about what might have happened. Everyone ends up exactly as they are at the start of P&P.  Also, I love the history of things. I love the depth that a prequel can give to an original story, not that P&P needs anything from me, but just to expand on the back-story, to delve into the history, felt really exciting.

The book also contains a story of its own, to create the arc and structure of a Jane Austen novel, the kind of plot that I, myself, like to read. Because everyone knows how the Wickham and Georgiana story ends, I have woven it with another story with some mystery and drama to keep the pages turning.

Have you any plans to write another book?  If so, will it be linked with another Jane Austen novel?

I am actually in the middle of writing my next book. I had planned to write another Jane Austen prequel, this time to Sense and Sensibility, but I was approached by a publisher soliciting a submission of a manuscript like Follies Past in style, theme and tone, but not fan fiction. I agreed to write one for them, and that is what I am working on. It is called Mary Green and should be released next March. It is set in Regency England, and is written in the language of the period. It is the story of an orphan who is raised by a wealthy family but must strike out on her own and find her own happiness.

And lastly, if you found yourself shipwrecked on a desert island, what four things would you want to have with you and why?

Aside from the basics of survival, like water and food, I would say firstly a couch. I always need a couch. Secondly company. I won’t be too specific, but I would need company, good company. Maybe that’s cheating, because it’s meant to be a desert island, but really, nothing else would help me if I didn’t have people around. Third, a dairy cow and fourth cake.

SYNOPSIS FOR FOLLIES PAST

Caroline Bingley is convinced of Mr. Darcy’s affection and determined to convert his regard into advantageous matrimony as swiftly as propriety will allow. Young Georgiana Darcy has just been taken from the innocent seclusion of her country school, and is about to be sent off to face the rigours of town, to complete her education in all the ways of society before entering upon it. Mr. Darcy intends an alliance between his young charge and his closest and most affable companion, Mr. Bingley, who, in all his self-effacement, betrays no knowledge of the scheme. Colonel Fitzwilliam has his own ideas about Georgiana’s future, while Lady Catherine regards the whole affair with all the disdain and suspicion befitting of her rank.

As the cast turn their faces to London, to that mire of all things perilous and enticing in the way of public balls and morning calls, one gentleman awaits them with all the charm and breeding that a handsome face and merciless ambition can beget.

200 years after the publication of Pride and Prejudice, this new novel treats readers to the complete and dramatic history of Mr. Darcy and Mr. Wickham.  To read it is to step back into the charming world of Jane Austen’s England, to pass a few more hours with some of her beloved characters, sympathetically portrayed as they might have been before ever they came to Netherfield. With language convincingly reminiscent of Austen herself, and a meticulously-researched Regency setting, Follies Past is the book Austen fans have been waiting for.

Sold by Amazon and Createspace

Praise for Follies Past

“Kerr manages to evoke the essence of Jane Austen in the first sentence of this book, and carries it through to a satisfying ending with humour, intelligence and heart-warming characterisation…. The language is exquisite, and so Austen-like I found it hard to differentiate between them.” Historical Novel Review

“…by far the best Austen spin off I’ve had the pleasure of reading… a novel that reads like one of Austen’s own making… Kerr does an excellent job of taking the small tidbits of information we know about characters and giving them a full and lush back story without straying from our vision of them… beautiful and brilliant, and I cannot imagine an Austen fan who would not love it.” Anakalian Whims

“Well-written and extensively researched, Kerr captures the essence and style of nineteenth century England… While there are many prequels and sequels relating to Jane Austen’s classics, Follies Past is one I heartily recommend reading!” Compass Book Ratings

“…admirably maintains the tone and tenor of Austen’s original work, her bygone era lovingly resurrected with an infallible eye for detail and a keen ear for dialogue… a genuine joy to read… There is the jocularity, craving and indulgence that attests to the timeless allure of Austen.” Book Viral

“From the first two paragraphs it was clear to me that I was to become a captive audience. The language was beautiful and very similar to Austen’s…  a fast read and what a delightful fast read.” Bibliobetty Reviews

Here on Tuesday for Christmas lunch...the first of many.

Here on Tuesday for Christmas lunch...the first of many.
My little feathered Christnas friends have a new companion...
Sometimes there are special moments that stay with you for a long time. This was one of them from our holiday in Fowey last year. Dinner at The Old Ferry Inn, Boddinick and then afterwards travelling back as dusk settled over the river - magic! #Cornwall #Fowey #holidays
Mist along the river this morning...
Driving acriss Bannerdown Common on our way to lunch yesterday. A little sunshine between the raun..