Tuesday Talk will be back next week.  To fill the gap this week (yes I know it’s Wednesday)  I’ve decided to slip in this post, posing the question ‘How much does real life influence your writing?’

From my personal viewpoint the answer is quite considerably. All my books have had a rural backdrop and writing about country life has been easy for me as until the age of 12 I lived in a small Wiltshire village.  Remote and sitting on the edge of Salisbury Plain, a heavy fall of winter snow could cut us off for a week.  With no buses able to run and without a shop, this meant the local farmer had to take his tractor and trailer across the field to collect basic food supplies from the next village.  This was before town dwellers were looking to escape to the country; when several generations of the same family lived in close proximity to each other. For years little had changed.  Seen through my young eyes it was a peaceful, idyllic way of life. Winters could be harsh but that was more than compensated for by summer months where grass, wheat and barley fields formed a glorious patchwork across the landscape.  There were also rolling hills,  and sheep and cattle dotted everywhere. The most wonderful place for a child to grow up.

When beginning to put the components together for my very first book, therefore,  it was very much an environment I knew I could create 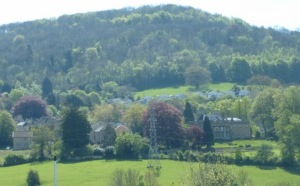 and feel comfortable setting my characters in. So I set about taking pieces reality and incorporating into my fictitious landscape. I love woods too (what would a village be without local woods?) and those across the valley from where I live were the inspiration for ‘Hundred Acre’ which sits above Meridan Cross.

he village pub in  my latest book, – The Black Bull – is in fact, based on a local in a village a few miles away. My previous OH actually grew up there and as an adult played for the pub’s cricket team.  Like the Black Bull it now has a great restaurant while still retaining a traditional bar with flag stone floors.

Google Maps are another really useful tool.  In one of my books I had to ‘walk’ one character around Verona.  Not having been there for many years, I could visualise the Arena – the Roman amphitheatre where concerts are held.  I also remembered visiting Juliette’s Balcony.  In order to bring some realism into my character’s visit, however, I needed to be able to describe where she was walking and what she was seeing. So I simply toured Verona’s streets via Google Map – perfect!

Talking of characters, a few of mine have been ‘borrowed’ from real life too’.  I guess the most important one of all from that first trio of books was the owner of Little Court Manor, Laura Kendrick. She was based on a lady called Marjorie Welsh, who lived in the manor house when I was a child.  A lady of mature years, married with grown up children, she had been a debutant in the days when they were presented at court. Very much the local benefactress, upon arrival she automatically took responsibility for the villagers – running the elderly to hospital appointments, having them all up for tea and cake on occcasions and even wheeling a barrow full of logs through the snow to a young couple whose baby was imminent. There was absolutely nothing patronising about her. A very genuine public spirited lady. Later as an adult, if I was visiting my grandparents I’d drop in and see her.  On one occasion I found the whole family in the kitchen preparing food for a dinner party that evening.  She’d deliberately given the kitchen staff the evening off, wanting them to do all the food prep themselves. The villagers who worked their had the greatest respect for her, all agreeing she was a fair and generous employer.  A unique and lovely lady, her character was absolutely perfect for Laura.

Another village character I borrowed was Tom Stone or ‘Brusher’ as the locals called him.  This was on account of the very heavy black moustache which hung over his top lip.  He worked on the railways and owned this very large black and white dog called Toby who could bark for England. It almost seemed the animal ran on batteries – he never shut up!  When creating characters for my first book I borrowed Brusher and turned him into the local poacher, ‘Doggie’ Barker, whose faithful friend was – yes – Toby.  The real Toby was a ‘Heinz 57’ as my grandfather used to refer to him, a dog of indeterminate breed.  Fictitious Toby, however, was to have the elevated status of a Border Collie.

By book four I was moving my backdrop abroad.  The Costa Del Sol, a place where we’d spent quite a bit of time before mass urbanization overtook that part of the coast, seemed ideal. Orlando Flynn, an enigmatic character central to the plot, lived there and had a small dark moustachioed Spanish ‘gofer’ called Elvira.  When asked how the two of them had met, Flynn, as he was referred to, said he’d rescued him from a life on the streets being paid by drivers for moving industrial waste bins to free up parking places.  Does this sound far fetched?  Well in fact it wasn’t.   While wandering the streets of Seville, believe it or not, I actually saw this happening.

So do any of you writers out there use fact to help you create fiction?  For me it works well – would be interested to hear your thoughts on the subject though.