Hi Julia and welcome once again to Tuesday Talk. For those who may be reading my blog for the first time, can you tell us a little about yourself?

Hi Jo, good to be with you today! Well, where do I start? I’m fascinated by the medieval world and concepts of time travel. I love books that evoke a time and place vividly so that I can feel I’m right there. And those are the sort of books I like to write as well. I read English at Keele University, England (after a turbulent but exciting gap year in Ghana, West Africa!) specialising in medieval language, literature and history, and I have a PhD in socio-linguistics. I wrote my first novel at 10 years of age, but I became a school teacher, then a university lecturer and researcher, finding myself unexpectedly a single mum and therefore the sole ‘breadwinner’ of the family. Finding Jess (2018) is my sixth book and the last of the Drumbeats trilogy (which begins and ends in Ghana). Apart from insatiable reading, I love travelling the world, singing in choirs, swimming, yoga and walking in the countryside in England and Madeira where I and my second husband divide our time.

What made you decide to become a writer?

I’ve always written, but had no idea how to do it commercially. In those days there was little advice, no indie writing (other than what was called the ‘vanity press’), no Amazon, or social media. Publishers were difficult to access. I wrote the first ms of my children’s time-slip novel (S.C.A.R.S) and sent it on spec to about 5 or 6 publishers, got rejections (although now I see they were actually very positive!) and gave up. I was leading a very hectic life as a teacher/lecturer and single parent, which had to take priority. Much later, about 7 years ago, having published academic papers and texts as part of my job, I was persuaded to write and publish a more creative book and The Old Rectory: escape to a country kitchen was born, which combines memoir, food history, research and recipes. I found that I loved the publishing scene as it now was, much more supportive and helpful. So I rewrote S.C.A.R.S and began the Drumbeats trilogy. I joined the RNA’s New Writers’ Scheme which was very encouraging and never looked back: within three months I had a publishing contract for the Drumbeats trilogy. I recently finished my job at the university and am now writing full time.

You are a versatile author, having written not only the Drumbeats trilogy but a children’s book, an historical novel and a memoir. Which of these did you enjoy writing the most?

I can’t believe that Finding Jess (the last of the Drumbeats trilogy) is my 6th published book in 7 years! Initially, I had no idea which genre I wanted to write in, so tried several! I’ve loved them all in their different ways, as they’ve all been very meaningful to me at the time of writing, but I think now that I’ve found my niche, and that is historical (medieval) time slip/multi period romance which inevitably centres on a mystery, like A Shape on the Air, which was published last year. I loved writing that one, especially because it’s a time slip set partly in the early medieval period which is my research interest. I know that still crosses genres (or sub-genres of romance) but I don’t want to write category genre. My WIP follows this direction.

Have you a favourite holiday destination?

That’s easy – Madeira! We’ve had an apartment there for the last 20 years and spend much of the summer over there. We love its climate, ambiance, scenery and cultural history. We walk, swim and sail there. It’s so relaxing and easy-going. And my WIP is set there! But I love travelling worldwide and especially enjoy Italy and France.

When you began to write Drumbeats were you consciously looking at a three book story, or did the whole thing evolve as you wrote?

I wanted to tell Jess’s full story and I knew that it wouldn’t fit into just one book. Looking at the scope (30 years) and the plot arcs I realised quite soon that it needed to be a trilogy covering different stages of her life, with a plot arc over all three: a saga, really, I suppose. The details of the second and third books then evolved as I planned and wrote the narrative and realised that they had to deal with some serious issues of modern life. So Drumbeats starts in the mid 1960s in Ghana and is essentially a coming of age story as a naïve 18 year old Jess escapes her stifling family and finds her way through civil war, tragedy and a new romance. Walking in the Rain picks up her story in the 1970s and 1980s, as she realises that the man she married isn’t who she thought he was, and the book deals with some tough issues of living with someone with mental health issues. Then Finding Jess looks at love, betrayal and rising above adversity; it ends in 1990 back in Ghana.

What are you currently working on?

My WIP is a medieval multi period romance, set in Madeira in the present day and the 14th and 16th centuries and based on the island’s historic events. It begins (uniquely I think!) 5 million years ago with the volcanic eruption that formed the island. Something in that dramatic event survives through the ages via an unquiet spirit to the present day and it’s the protagonist’s job (a medievalist) to restore harmony.

And finally, you’re organising a dinner party. Which four celebrity guests would you choose and why?

I’d invite the actor James Norton (hopefully coming as Rev Sidney Chambers from Grantchester or Prince Andrei from War and Peace, because I think he’s gorgeous, and I’d like to talk to him about creating ‘historical’ characters for the screen. I’d have the late Stephen Hawking to discuss the concept of time which fascinates me. I’d invite Dan Snow, the history guy, because we saw him recently and he’s very interesting about the medieval world. And Lucy Worsley because she’s fun and witty, and could talk to me about romance traditions through history and literature. I think that would make for an interesting, lively and amusing evening. 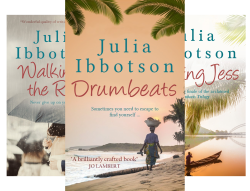 The blurb for Drumbeats, the first of the trilogy:

It’s 1965 and 18 year old Jess escapes her stifling English background for a gap year in Ghana, West Africa. But it’s a time of political turbulence across the region. Fighting to keep her young love who waits back in England, she’s thrown into the physical dangers of civil war, tragedy, and the emotional conflict of a disturbing new relationship. And why do the drumbeats haunt her dreams?

Drumbeats is a rite of passage story which takes the reader hand in hand with Jess on her journey towards growing into the adult world.

And for Finding Jess which is the last of the Drumbeats trilogy that was published by Endeavour this summer:
Single mother, Jess, has struggled to get her life back on track after the betrayal of her beloved husband and her best friend. When she is on the brink of losing everything, including her family, she feels that she can no longer trust anyone. Then she is sent a mysterious newspaper clipping of a temporary post back in Ghana. Could this be her lifeline? Can Jess turn back time and find herself again? And what, exactly, will she find?
Finding Jess is a passionate study of love and betrayal – and of one woman’s bid to reclaim her self-belief and trust after suffering great misfortune. It is a feel-good story of a woman’s strength and spirit rising above adversity.

Award-winning author Julia Ibbotson is fascinated by the medieval world and concepts of time travel. She read English at Keele University, England (after a turbulent but exciting gap year in Ghana, West Africa) specialising in medieval language, literature and history, and has a PhD in socio-linguistics. She wrote her first novel at 10 years of age, but became a school teacher, then a university lecturer and researcher. Finding Jess (2018) is her sixth book and the last of the Drumbeats trilogy (which begins and ends in Ghana). Apart from insatiable reading, she loves travelling the world, singing in choirs, swimming, yoga and walking in the countryside in England and Madeira where she and her husband divide their time.

Acclaimed author of:
Drumbeats (2015), the first of the trilogy set in 1960s Ghana: sometimes you have to escape to find yourself.
Walking in the Rain (2016), the second in the trilogy set in 1970s and 1980s England: never give up on your dreams.
Finding Jess (2018), the last of the trilogy set in 1990s England and Ghana: can the past ever be left behind?
A Shape on the Air (2017): historical (Dark Ages/early medieval) time-slip romance. Two women 1,500 years apart, with one aim: to reclaim their dreams and fight the dangers that threaten them both across the ages …
The Old Rectory: Escape to a Country Kitchen, (first published 2011, re-released 2017) a feel-good story of the renovation of a Victorian rectory interwoven with period recipes to feed the soul, all from the rectory kitchen.
S.C.A.R.S (first published 2012, re-released 2016) (children’s novel): a troubled boy slips through a tear in the fabric of the universe into a parallel medieval fantasy world of knights, dragons, and a quest for the triumph of Good over Evil. But can he save himself?

A Shape on the Air:
http://myBook.to/ASOTA

Walking in the Rain:
http://myBook.to/WalkingintheRainDrumbeatstrilogy

Pinterest page: includes boards with pics and images that inspired each book