Good morning Adrian and welcome. Can I start, as always, by asking you a little about yourself?

Good morning, Jo and thank you for having me. It’s a pleasure to be here. I am very lucky to be able to say I live in a very beautiful part of the country, down here in Cornwall. It’s a place filled with inspiration for every genre you can think of. I live here with my wife and four children. A couple of years ago I had to make a decision, which has led me along a completely different path to the one I was travelling. It resulted in me returning to full time education and embarking towards a career in teaching. While it would be a dream come true to write full time, I am focused on becoming an English teacher at secondary school level. For me this is the next best thing and I currently get to read and write all day. I am in the second year of my English Literature with Creative Writing Degree at Falmouth University here in Cornwall.

When did you first decide you wanted to write and how did you begin that journey?

I first began to write in about 2000 after being given a word processor. I had no idea what I was going to write, so I just began to type. I was in the army at the time and my 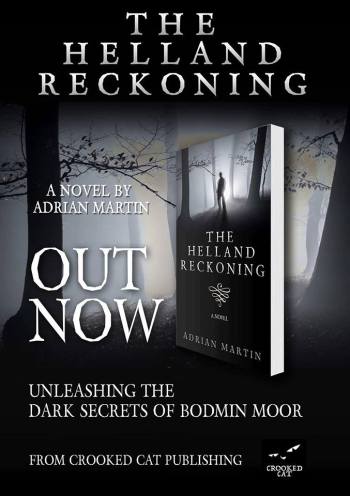 writing was sporadic, but I had the start of a novel. I can’t help but look back now and think how naïve I was towards the process. It is only in the last three years or so that I have really begun to understand how it works. While I began to write, I didn’t have a finished manuscript until several years later, which I completed while on my second career as a long distance lorry driver. I must admit, I thought it was going to be much easier to get it published than it was in the end. I knew no one, and nothing of the industry, only how things like television romanticise the life of a writer. However, the book I started in the year 2000 was eventually published in 2016 by Crooked Cat Books. It underwent many transitions and countless rewrites, but with perseverance it got there. It is now unrecognisable as the book I started, but it has taught me a lot.

Who are your favourite authors and have any of them inspired your writing in any way?

At the time I began writing I was heavily into Dean Koontz, and I think I can safely say that is where the inspiration came for me to write dark material. I was later influenced by British horror writer Shaun Hutson, who is probably still the only horror writer I read when he releases a new title. I think all authors have certain other authors who have inspired them to write, how would we know what we want to write if we didn’t? I certainly think that the philosophy of write what you enjoy is more prevalent that write what you know or read. Just because you know something doesn’t mean you enjoy it…

You began as a thriller writer but have now switched to romantic fiction. What was the reason for this?

I did and I have. When I finished The Helland Reckoning, I began another horror novel, but by the time I had got to 45k words I realised it wasn’t working, and actually began to fall out of love with the genre. While I have huge respect for horror writers, I no longer felt it was the place for me. Perhaps I was in a dark place when I began writing, or maybe it was the influence of what I was reading at the time, but more than likely a combination of them both. However, it wasn’t until I did a series of workshops with Man Booker long lister, Wyl Menmuir that I was forced to announce what I was working on. The truth was I had nothing and no idea, so blurted out that I am writing a romance! Many a frown faced me at the unexpected announcement. I think I said it as I was getting to know a lot of romantic writers, and most were ladies, so, I thought I am going to have a go. Nothing like being put on the spot though! And my wife also declares me the least romantic bloke she knows, so it came as a bit of a shock when I told her I was going to write a romance novel. The funny thing is, I don’t feel out of place in this genre, and may look to join the Romantic Novelist Association at some point as I will most definitely be staying in this genre, and will look to publish in the years to come.

Of course. I am currently 40k words into the aforementioned romance novel, and I can safely say I have never enjoyed writing so much in my life. The working title for the book is: The Little Hotel on the Cliff, which is set here in Cornwall, down near Sennen Cove. It centres around a widower and a rather obnoxious lady from London. There are several other twists, including a tragic turn of events, but it also has many fun scenes thrown in. Since starting the book, the characters have become my friends and I have a great relationship with them (They talk to me a lot – something I guess only writers can understand?). I have no intention of publishing this novel as it began as project for me to put my new learnt skills into practice before I write something else later on. But who knows what the future holds? Having said that, I already have an idea for a follow up book, but told from the point of view of an entirely new character. Never say never, I guess? I am also working on two short stories, one of which, is in a different genre (drama) and will be turned into a screenplay (although never into a short film as it’s an assignment for University). The other, titled: Year of the Daffodil is a romance, but holds a much more tragic tone. I hope in the future to put together a collection of short stories, but not yet. As I am under no contractual obligations to publishers, I am able to write with freedom, and enjoy the process.

And lastly, if you had to spend a whole year on a desert island, what would your ‘must haves’ be and why?

My family, despite how crazy they are I couldn’t be without them. We would have an absolute blast. Also my laptop, for obvious reasons, and plenty of books. What else would you need to be happy? Oh, and ice cold beer! I’m sure I would get over my social media withdrawals pretty quickly – going cold turkey on a desert island, I think I’d soon forget about the rest of the world!

Adrian lives just outside of Newquay, Cornwall with his wife, Lisa, and four children. He began writing while serving in the British Army, starting with (bad) poetry written on blueys (blue sheets of paper that fold into envelopes) as he was on a peacekeeping mission in Kosovo. After leaving the army, he tried being a security guard, but found walking around the supermarket for fourteen hours a day somewhat monotonous, so decided to give long distance lorry driving a go. It was whilst doing this he began to pen “The Helland Reckoning”. The novel was inspired by the small hamlet of Helland, where Adrian stayed with a friend as a child. It had remained in his thoughts for many years, so it became the natural setting for the book. After five years of tramping around the U.K and Europe, he decided it was time to be home more, so began driving fuel tankers around Devon and Cornwall. After breaking his ankle playing football, Adrian was made redundant so set to work rewriting the manuscript. However, Adrian’s last job, working for a portaloo company (which was actually a lot of fun) made him want to change his career, so in September 2015 he returned to full time education studying English Literature with Creative Writing at Falmouth University, where he is currently in the second year of his degree. His hobbies include spending time with his family, writing, football, skiing, walking and Facebook! He is also part of the training team for the Duke of Edinburgh Award at Newquay Treviglas school, so if he looks lost out on the moors, please feel free to point him in the direction of the nearest pub! Feel free to hunt him down and chat.

One thought on “TODAY TUESDAY TALK IS IN POLDARK COUNTRY TALKING TO AUTHOR ADRIAN MARTIN ABOUT HIS LIFE, WRITING AND DESERT ISLAND MUST HAVES…”