What I love about being a reviewer for Brook Cottage Book tours are the variety of reads and wonderful discoveries I make along the way. Pippa Croft  is a writer I have not come across before and as with several of the other books I have reviewed I am delighted to say I have found yet another author I want to read more of.

Although Third Time Lucky is the third book in the Oxford Blue Series I found it easy to read as an independent, stand alone novel. The problem I now have, however, is that I find myself needing to download the other two – The First Time We Met and The Second Time I Saw You. One book in the series is simply not enough; I need to know the whole story!

Now I’m not usually a fan of novels written from the first person as I do love to see things from various viewpoints. However, I can say hand on heart as soon as I began reading this any pre-conceived ideas flew straight out of the window. This story, told from 21 year old post graduate student Lauren Cusack’s viewpoint, has everything. There is humour and steamy sex scenes which are well written and in a totally different league to those in ‘50’. Then we have hot hero Captain Alex Hunt (come on girls admit it, you’d love to wake up beside someone like him) and a couple of pretty awful villains all wrapped up in a great read which keeps you hooked until the last page.  It left me wondering whether we had seen the last of Lauren and Alex or if there might possibly be a sequel coming along at a later stage.  Secretly I’m hoping the answer will be yes.

As I love Oxford the setting there with the backdrop of student life plus the goings on at Alex’s stately home, Falconbury was a big plus even before I had fired up the Kindle.  Coupled with this, the whole book was written in such a beautifully smooth, seamless way.  A deliciously funny, sexy and entertaining novel worthy of the five stars I’m awarding it.

My complimentary copy of Third Time Lucky came from Penguin Books UK  via NetGally in exchange for an honest  review.

For fans of Sylvia Day and E. L. James, the third and final part of this exciting romance series.

‘It’s Sister Dixon from the Royal Infirmary here. I’m sorry to tell you that Captain Hunt has been involved a serious incident.’ 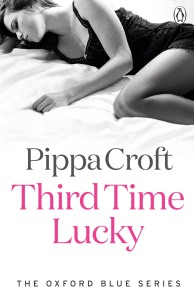 her final term at Wyckham College, Oxford. But this call changes everything. Her relationship with impossibly handsome aristocrat Alexander Hunt has been turbulent and Lauren knows she needs to walk away. Yet now as she rushes to his side she knows she will be inevitably sucked back into his world.

And sure enough, Alexander – even a seriously injured Alexander – is an intoxicating cocktail Lauren cannot resist and despite everything that is sent to thwart them – and with Alexander there is drama at every turn – she finds herself happier than she’s ever been.

But as her final term races by, and she is offered the perfect job back in Washington, the impossibility of their romance hits home.

Can there be a future for Alexander and Lauren?

Fans of E L James, Tammara Webber and Samantha Young won’t be able to get enough of Pippa Croft’s Oxford Blue romance series. Lauren and Alexander’s journey begins in The First Time We Met, and follows on in the brilliant sequel, The Second Time I Saw You, which are both available as Penguin e-books. 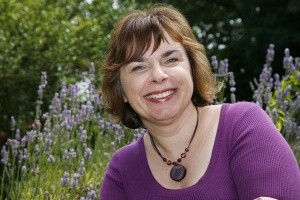 Pippa Croft is the pen name of an award-winning romantic novelist. After studying English at Oxford, she worked as a copywriter and journalist before writing her debut novel, which won the RNA’s New Writers’ award and was later made into a TV movie. She lives in a village in the heart of England with her husband and daughter.