As a writer if there’s one thing I’m grateful for it’s the ability to type. Finishing school I enrolled at college for an OND in Business and Finance with secretarial training. The latter was very much involved with unlocking the mysteries of shorthand, audio typing…and typing.
Faced with a typewriter for the first time and looking at the QWERTY keyboard, I was at a loss to understand how anyone could use this machine and produce anything that resembled the written word. But we did and sitting down at a desk and spreading your fingers across what was termed your ‘home keys’ soon became second nature.

We had a formidable woman teaching us – Mrs Cameron Smith. She was built like an Amazon with muscular calves and elegantly arranged pale lilac hair – at the time it was fashionable for ladies of a certain age to camouflage any grey with pastel shades of lilac or blue. Her golden rule was NEVER look at your keys while typing. We learnt on manual typewriters which meant you had to exert quite a bit of pressure to get the keys to make any impact against the platen and the paper. It soon made us aware of how weak our small fingers were but after a while they became as strong and flexible as the rest.

At the beginning of each lesson (once we were fairly proficient) we warmed up by typing to music, usually to The March of the Tin Soldiers – something that still haunts me. This was followed by a speed test – five minutes of copy typing from a printed sheet of Quarto old-speak for a piece of paper slightly smaller than A4). While this was going on Mrs C-S would wander up and down the aisles between desks with eyes like a hawk and a twelve inch ruler lurking behind her back. Woe betide anyone who so much as glimpsed at their fingers. Luckily I was never the recipient of the flat of a ruler over my knuckles (something that in today’s world would surely have been labelled assault). Persistent offenders had the addition of having a special box placed over the keyboard to cure them of their illegal downward stare. They were instructed to use a huge poster of a typewriter keyboard on the wall at the front of the room to guide their fingers.

After leaving college I had only been working for a short while when the electric typewriter arrived. This was a 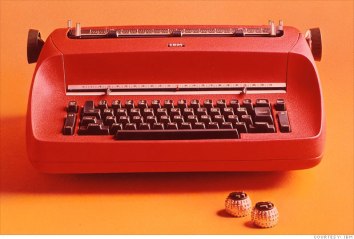 total revolution! At last we were all able to say goodbye to aching fingers. Everyone coveted – and I was lucky enough to have – a red IBM Golf Ball typewriter and at the start it took some getting used to. No more keys leaping out of the type basket to make their impact on paper; this circular metal ball covered in letters simply whizzed up and down. There were downsides of course. It wasn’t a good idea to rest your fingers on the keyboard at any time as the slightest pressure on any one key would automatically set it off like a machine gun, leaving a trail of gibberish across whatever you were in the middle of typing.  Olivetti also produced an electric daisy wheel typewriter. The beauty of this machine was that you could 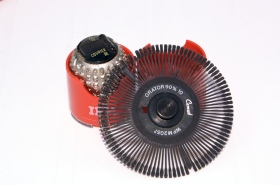 buy replacement wheels with different typefaces making it a very versatile piece of equipment. Today, of course, the computer leaves us spoiled for choice with innumerable typeface options, so different from those dark days!

Things settled down for a while and then the electronic typewriter arrived. I guess this was the forerunner of word processing as the one I

used had a small window built into the front to enable text to be edited – very cutting edge at the time. By the late ‘80’s early ‘90’s computers/word processors were beginning to become norm in the provincial workplace (no doubt London and other big cities had had them for some time). My first session on a word processor was surreal. In the past typing had been about movement and noise. Now here I was, sitting in front of a strange detached keyboard. When my fingers hit keys there was a gentle tapping sound but nothing felt as if it had connected with anything else. It was only when I raised my eyes to the screen in front of me that I saw words appearing as if by magic. It was probably as weird an experience as the progression from manual to electric typewriter.

In early desktop computers  WP packages were almost an afterthought and in some instances not very user friendly. Therefore I opted for a dedicated word processor instead, using the computer for spreadsheets and databases. Suddenly it seemed you no longer needed to be able to type to use a computer. Of course it completely transformed how things were done in the workplace. A manager doing his own typing? Shock, horror! That would have been unheard of during my early years at work. Then it was all about dictation and audio tapes and getting the secretary to type it all up.  It took a little time to adjust to typing on a computer keyboard but I got there and soon worked up to my 80+ words per minute. There is only one problem I have and that is as a touch typist I find it very difficult to build up any speed on a ‘flat’ laptop keyboard. That is why, I guess, I prefer my desktop.

Although the workplace has radically changed,  I’m glad I went through the fire and brimstone of Mrs Cameron Smith’s teaching sessions. It wasn’t wasted because if I hadn’t learned the skill I’d be reduced to two finger typing while typing my manuscript and working at a snail’s pace. As far as I’m concerned touch typing is definitely an added bonus if you’re a writer. So here’s to the unforgettable Mrs Cameron Smith with her lilac rinse, athletic calves and menacing ruler. I’m forever in her debt.