Hi Sue and welcome. Can I start, as always, by asking you a little about yourself?

Hi Jo, and thanks for the warm welcome! I live at the bottom edge of Wales, about a mile from the sea, where I moved over thirty years ago after surviving ovarian cancer. At that time, I was a policewoman in industrial Essex, so it represented not only a change of scenery, but also of culture, as I became instant mum to two little boys!

When did you decide to become a writer and how did you begin that journey?

I’ve always enjoyed writing, but the journey towards novelist began when I learned to ride a motorbike, aged 52. My steep learning curve, and the amazing women I met during that time was the catalyst for the idea behind ‘Summer at the Art Café’. The idea refused to go away, and the novel began life as NaNoWriMo in 2014. Don’t laugh, I was enthusiastic and naive, and most surprised to discover how difficult it was to write a novel! I read books about how to write, and wrote my quota in the evenings until I had my 50,000 words. It was mostly pretty awful, but I learned such a lot.

As an artist what is the most unusual commission you’ve received?

I’ve had some funny commissions. I’ve been asked to paint a man in a tutu (I turned that one down…) and some years back, another guy asked for a portrait of himself for his wife. I had no idea he wanted a nude until he started stripping off in my studio. I’d taken a dozen photos before I remembered I had no film in the camera…

Now that Summer at the Art Café has been published what is next for you?

The second in the trilogy is already written and under contract, and I’m currently working on the third. They’re still set very much on the Welsh coast, and family issues like step-children and the modern extended family feature largely.

Anywhere I can go on my motorbike! Although I loved Thailand when I visited after the terrible tsunami, and I’d like to return to see how the country has healed.

What would your advice be to new writers?

Just get those words down. I’m terrible at taking my own advice though, and I can spend way too long fretting about plot threads that go nowhere. Somehow, when you actually get the words down, they start to make sense. It’s a sort of magical alchemy that never stops surprising me.

And finally, you’re planning a dinner and inviting celebrity guests. Which four (dead or alive) would you invite and why?

Aw, I’d love to have met the wonderful Robin Williams. I’m not very impressed by showbiz type celebrities in general, so I’d probably have a great evening with some of my amazing friends, and my late parents, particularly my mum who died last year and was my biggest inspiration. 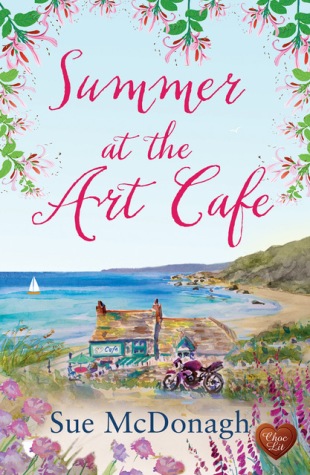 From watercolours and cupcakes to leather jackets and freedom …
If you won a gorgeous purple motorbike, and your domineering husband said you were too fat for leathers and should sell it, would you do as you were told – or learn to ride it in secret?

Artist and café owner Lucy Daumier intends to do just that – but learning to ride is far from easy, especially under the critical eye of prickly motorcycle instructor, Ash Connor.

But gradually Lucy gets the hang of it, and in the process re-discovers the girl she used to be. So starts an exciting summer of new friendships and fun – as well as a realisation that there is more to Ash than meets the eye when she is introduced to his seven-year-old daughter, Daisy.

But can Lucy’s new-found happiness last when a spiteful family member wants to see her fail?

What people are saying about Summer at the Art Cafe:
My favourite book this year! Initially the beautiful illustration on the cover made me smile and I soon realised that I had picked the ideal complement to enjoying the sunshine in the garden. I loved this book and the evolving story which developed around the characters, who in the main you could not help but warm to. ~ Amazon reader.

This book is an impressive debut novel, with all the right ingredients for that perfect summer read. ~Amazon reader.

Delicious from beginning to end. I’m not in the slightest bit surprised that Sue McDonagh is an artist as well as a writer. I have rarely read a book where the author so skilfully paints pictures in your head with such vivid colour and description that it all becomes so very real. ~ Amazon reader

2 thoughts on “This week Tuesday Talk chats to Sue McDonagh, about Art, Writing and her choice of Dinner Guests…”

Cottage in the grounds of Lanhydrock. #Cornwall #septemberholidays

Cottage in the grounds of Lanhydrock. #Cornwall #septemberholidays
Here today for afternoon tea but couldn't resist taking this photo of the hotel's Moroccan/Mediterranean themed restaurant
Dining Room Display The Catherine Wheel, Marshfield
Spent a few hours here today. Long queue for house so wandered around the wonderful gardens still full of colour...
Dinner at The Old Ferry Inn Boddinick then back on the ferry to Fowey #fabulousfood #Cornwall #holiday
Loading Comments...
%d bloggers like this: