Since May this year I have on occasions posted comments about my accident, mostly on Facebook.  This has been to update everyone on how the healing process is going.  I also wanted to put my thoughts onto my blog not only to catalogue this very unexpected journey but also in the hope that it might help anyone else finding themself in the land of broken bones.  In that one moment the world you knew no longer exists; that easy way of putting one foot in front of another; of running, climbing or jumping has gone, replaced by challenges you can’t even begin to contemplate.

May seems a lifetime away now. A milestone birthday beckoned. Our holiday in Menorca, staying at a friend’s villa had been arranged way back in October 2017.  I had been on countdown since after Christmas.  Things were chugging along and on the writing front in February I had submitted the completed draft of my latest WIP The Boys of Summer to a publisher.  May seemed to arrive all too quickly and having stayed in Menorca back in 2011 I was looking forward to reacquainting myself with the island.  We landed on Tuesday 15th and our first two full days were hot and overcast.  The villa had one first floor bedroom with a sun terrace above and two downstairs bedrooms.  Our friends took the upstairs room and we took one downstairs – which was just as well bearing in mind what was to come. On the evening of 17th May we returned from dinner in Mahon and I checked my phone only to discover a message from the publisher asking me to get in touch.  They wanted to publish my book!  What a fabulous present I thought, coming the day before my birthday.  I felt really positive and looked forward to the next day, sure this was a good sign there would be a lot of good things coming my way during the coming year.

On 18th May (my birthday) we drove to Ciutadella on the western side of the island, did

some shopping, wandered the streets and had lunch.  On the way back we stopped off and walked down to a small cove and I remember picking my way very carefully over the uneven, rocky pathway. The last thing I wanted to do was injure myself! 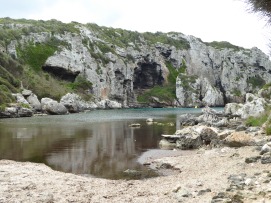 A couple of hours later I was showered, dressed and ready to go out for my celebratory meal.  Anything  valuable was kept in the safe upstairs in our friends’ bedroom.  I needed a bracelet and so I walked upstairs to get it.  As I returned, and stepped off the last stair, my foot came down awkwardly on a coconut mat lying on the dining room floor.  Everything happened so quickly. One moment I was upright, the next flat on my back on the floor. I rolled over and my husband and his friend were there immediately, helping me up. My foot was already very puffy and they were talking sprain, but as soon as I tried to stand it was clear I had done far more damage than that.

The evening which had started out so well, was now in tatters.  The men headed off to the nearest pharmacy, returning with a can of cooling spray and an elasticated ankle support.  We ordered a takeaway from the local bistro and the bubbly stayed in the fridge probably because celebration was the last thing on our minds.  Everyone hoped by the next day I’d at least be hobbling about. Unfortunately I wasn’t. 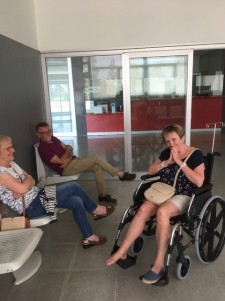 ankle.  They fitted me with an open plaster which would enable me to fly home safely and I was told to go to my local Emergency Department as soon as I arrived back.  Tuesday it appeared was within the time frame to do this so I didn’t need to cut the holiday short. I was given three lots of discharge medication, including Clexane, which I had to inject into my tummy each day to prevent blood clotting. Luckily I’m not squeamish but until I got the hang of it, my efforts resulted in a series of  bruises which looked like a bad attempt at tattooing.  The doctor in ED also told me the plaster was non weight bearing and I should keep the leg off the floor. I now realise if you’re going to break any part of your lower limb then it should be on the left side.  I soon discovered my brain is wired up to tell my right leg it needs to go to the floor.  My left leg, well OK it’s there but only as a support act.  Yes, in those first few hours I really had to think every time I attempted to move but gradually I began to successfully block out my right leg and use my left.  The last thing I wanted to do was inflict more damage on my ankle and end up as an in-patient.

On arrival back at the villa I contacted the insurance company, who had already been notified of my planned visit to Emergency Department.  They were absolutely fabulous – a nurse spoke to me about the accident, what had happened in ED and also the discharge drugs they had given me.  Our flight details were taken and ambulance transport arranged to get me to the airport, with a mini bus pick up the other end.  They also bought extra seats on Easy Jet so I could travel back with my leg elevated.  We made the best of the next few days.  The ‘boys’ rented me crutches from the local pharmacy but being small I didn’t have enough strength in my shoulders to support myself.  So instead I got about the villa on my backside, pulling myself up either onto the bed, the loo or the couch in the lounge.   Yes, suddenly I had to rethink everything I did and some of the simplest tasks were like climbing Everest!  Having a shower was impossible – instead I used a plastic patio chair to balance on in front of the shower room wash basin.  Drying and tonging my hair wasn’t a problem nor was dressing as I could do this sitting on the bed.  Getting from the bedroom to the lounge I became quite proficient at scooting along the marble floors on my bum!  We did get out for meals, the men

helping me out to the MPV and into restaurants,  although of course it did limit where we ate. We had to keep to eateries with adjacent car parks and this usually meant outside the towns.  Sadly what I really missed were the places on the island we intended to visit – how wonderful it would have been to wander cobbled streets, stop for coffee or lunch and do what I love doing on holiday -taking photos.  For those few days between my visit to Mahon ED and flying home, we encouraged our friends to go out and explore and not miss out, while we spent our day lying by the pool.

Our return journey wasn’t without its glitches.  On our day of departure ambulance transport turned up 2 hours

early.  We were in the middle of lunch which meant a bit of a scrabble around to check everything was packed before leaving. Arriving at the airport we were whisked through check in and soon in the departure lounge where we were eventually joined by our friends. Any hope of a speedy flight home was dashed, however, when we had to suffer a two and a half hour delay due to the French Air Traffic Controllers’ industrial action.  Having left the villa at 12.50 that day, we finally reached home just before midnight. Totally exhausted I fell into bed and slept like a baby.

The next morning we drove to our local hospital Emergency Department.  They removed the plaster, x-rayed me, confirmed the ankle was broken and then wheeled me to the plaster room.  As the two technicians were ’embalming’ my leg I noticed they had slipped a small inflatable pad under the ball of my foot.  A clear tube protruded up from the left side and of course I wanted to know what it was for. ‘It’s attached to a machine which regularly inflates and deflates it to help the swelling go down’ I was told. ‘Oh,’ I nodded, ‘Does that mean I’m going to take this equipment home with me then?’ All was revealed as the Senior Nurse in ED poked her head around the cubicle curtain obviously having heard our conversation. ‘Oh you’re not going home,’ she said, ‘I’ve just found you a bed, you’re being admitted….’

Colourful streets
Meet up in Bath for coffee today #sunshine🌞 #catch up #girltalk
Perfect evening for a balloon trip..
Happy memories of Norfolk. Next stop Dartmouth
On it's way to the editor.. and breathe.
#Cornwall #goodmemories #staycation
Loading Comments...
Comment
×
%d bloggers like this: