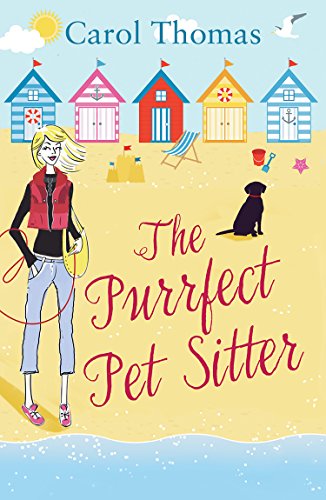 When Lisa Blake’s life in London falls apart, she returns to her hometown rebranding herself as ‘the purrfect pet sitter’ – which may or may not be false advertising as she has a rather unfortunate habit of (temporarily) losing dogs!

But being back where she grew up, Lisa can’t escape her past. There’s her estranged best friend Flick who she bumps into in an embarrassing encounter in a local supermarket. And her first love, Nathan Baker, who, considering their history, is sure to be even more surprised by her drunken Facebook friend request than Lisa is.

As she becomes involved in the lives of her old friends Lisa must confront the hurt she has caused, discover the truth about her mysterious leather-clad admirer, and learn how to move forward when the things she wants most are affected by the decisions of her past.

Two things don’t usually work for me in books. One is animals, the other children. However, I have to make an exception in the case of The Purrfect Pet Sitter, Carol Thomas’s debut novel for Choc Lit Ruby.

Lisa Blake left everyone behind to see the world. Meeting Ben along the way they travelled for a couple of years before eventually settling down in London with steady jobs, enjoying the buzz of the big city.  Sadly things haven’t gone to plan and she’s back home, living in her parents’ house. With Mr and Mrs Blake now moved to a new home in France, Lisa’s on her own (under the watchful eye of self appointed neighbourhood watch local Harold Martin) and has set herself up as a pet sitter. Her business, The Purrfect Pet Sitter doesn’t always deliver. In chapter one we see her chasing after black labrador Jack who has slipped his lead only to find him at a tea kiosk being fed bacon butties by an attractive biker in black leather called Dominic.

Returning  home has also brought back the past and the people Lisa left behind: best friend Felicity (Flick) and her first love Nathan Baker.  Running into Flick in the supermarket eventually sees the two sorting out their issues and a tearful reunion.     Lisa’s decision (while under the influence of alcohol) to check for Nathan on social media and then do something incredibly rash also sees the two of them meeting up again.

Lisa is a likeable character whose return home sees her having to confront her past before she can build a future.  She abandoned her best friend and first love so has a lot of bridges to build. She also has unfinished business with ex-boyfriend Ben, still in London. Elderly Winnie (Jack’s owner) is on hand, always there to share coffee and biscuits and her wise advice.

Flick and her brood are hilarious.  Although her life managing four kids seems chaotic at times there is an orderliness of sorts and it’s a warm, loving family.  I could however, sympathise with her situation. Desperate to find time to spice up her marriage with her husband Pete, with four boisterous children the opportunity was always going to be out of reach.

Once Lisa and Flick had sorted out their differences it was great to see them both together. So many funny moments. Nathan (now a fireman) and Dom (a paramedic) also become involved in Lisa’s life. The question is who will be the lucky man? Well, of course, I can’t possibly go into detail because that really would spoil the story.  All I can say is that this ticked every single box.  Choc Lit’s Ruby is for stories which tap into the reader’s emotions and The Purrfect Pet Sitter certainly did that for me.

A great debut from Carol…

Many thanks to Choc Lit for an ARC of the book in exchange for an honest review.

3 thoughts on “THE PURRFECT PET SITTER by CAROL THOMAS – REVIEW”

Quince now in flower in the garden.

Quince now in flower in the garden.
Can't wait to get some bedding olants in to give the garden some colour #springtime #gardening
Blossom everywhere...
Every year this house always has a wonderful display of daffodils
Blue sky and blossom on a fabulous spring day
Loading Comments...
Comment
×
<span>%d</span> bloggers like this: