Good morning Diane and welcome. Can I start, as always, by asking you a little about yourself?
Hi Jo. Thanks so much for inviting me to your blog! I’m an American living in Australia writing suspense novels set in both countries (although only my American ones have been published to date.)

I came to Australia in 1980 as a violinist with the Adelaide Symphony and later moved to a 50-acre farm in Port Lincoln, South Australia. There I discovered and fell in love with writing – while raising two kids, running a donkey sanctuary and keeping every pet you can name!

I tried for eleven years to get published before Random House Australia picked up my first thriller, RUN TO ME, which made the finals of the 2014 Daphne du Maurier Awards. My second thriller, HIT AND RUN, is due for release in early November.

When did you first decide you wanted to write and how did you begin that journey?
I came to writing later in life but my love of story-telling began at an early age and in a rather unusual way. As an only child I had to entertain myself a fair bit. My parents, both classical musicians, had given me my own record player with a collection of records.
These were all big ‘cinematic’ pieces – Nutcracker Suite, Rite Of Spring, Night On Bald Mountain, Fire Bird, Pictures At An Exhibition, etc. As I listened to these works alone in my room, I used my stuffed animals to act out stories that the music inspired.
I created these plays for my own amusement. But one day some friends came around and, with nothing else to do, I put on a record and performed one of my stories for them.
Perched on my bed with my audience seated on the floor before me, I acted out the story I’d invented to go with The Fire Bird Suite. I vividly remember the looks on their faces, their changing expressions as my story unfolded. And what a thrill I felt knowing my efforts had been responsible.
Though it took some time to emerge, I believe it was this early experience that, years later, grew into my joy of writing novels.

Who are your favourite authors and have any of them inspired your writing in any way? Tess

Gerritsen is one of my favourite authors and one of her stories inspired my novel, RUN TO ME. I’m drawn to stories about adults befriending children and loved Tess’s novel HARVEST for that reason. The only thing that disappointed me was that the heroine and the child she’s helping never actually meet. In writing RUN TO ME I used that element of an adult helping a child but had them together throughout the story.

What influenced you to write thrillers?
I’m a Hitchcock fan from way back. I’ve watched all of his classics dozens of times.
I so wish Hitch was still alive today creating more masterpieces, I think I’m attempting to satisfy my longing for his work by writing those stories myself.

I don’t write crime and I don’t write mysteries. Though my stories contain elements of both what I write mainly is suspense. Those stories where the protagonist is untrained and totally out of their depth with what’s happening to them. I just love writing stories about ordinary people thrust into dangerous situations who discover within them the courage to be heroes. 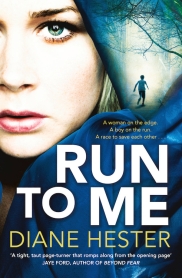 Do you have music playing when you write? If so, what are your favourite pieces?
I’ve tried playing music as I write but unfortunately it doesn’t work for me. I guess because I’ve been trained in music, if there’s music playing anywhere near me it demands my full attention, so it creates a bit of distraction.
My creative stimulus of choice is fragrance. Every day when I sit down to write I either light a scented candle (currently burning: Yankee Candles’ Pumpkin Gingerbark) or fire up the essential oil burner (favourite blend: orange, bergamot and rosewood.)
It’s become sort of a writing ritual for me. I read that our perception of fragrance is a function of the temporal lobe, the same part of the brain that deals largely with writing. So by stimulating this area with scents I’m hoping to fire up my writer brain.

Can you tell us about your up-coming new release, HIT AND RUN?
Like my first thriller, HIT AND RUN is set in rural Maine (I just love that part of America!) My heroine, Raina Wilkins, is driving home alone one night when she hits a man who darts from the forest in front of her. The injured stranger climbs in her car and forces her to drive on at gunpoint, but gets out soon after and disappears back into the woods. Raina thinks never to see him again, but Alec DeMarco has left something behind in her car, something others will kill to possess – evidence gathered by a homeless teenager with a deadly secret. When Alec returns for it, Raina is swept into a world of conspiracy, abduction and murder. A world where even the police want her dead.

Has being a professional musician helped you in any way as a writer?
Absolutely! I could fill pages with what I’ve carried over from music! Probably the biggest is that talent is greatly over-rated. I saw this not only as I was learning the violin, but from my years of teaching. I’ve seen so many kids with little ‘natural ability’ go on to surpass more talented ones simply because they worked consistently.
Music ingrained in me the understanding that if I practice something I’ll get better at it. The results of practicing are easy to see when you’re learning an instrument – there’s a passage in the piece you’re working on that’s currently beyond you but after days of focused practice it starts to improve. You know you’ve progressed because today you can play that passage and yesterday you couldn’t.
It’s not as easy to see how your writing is getting better. Sometimes the only way is to pull out something you wrote months or years ago and compare it to your current work. Having learned this from music, however, enabled me to trust that my writing was improving even when I couldn’t see it as readily.
The other thing I learned from music is patience and perseverance. Learning the violin takes years and progress isn’t always steady. Sometimes you get stuck on plateaus where you don’t see any improvement for ages, then suddenly you’ll leap ahead. The same goes for writing.
Another great lesson music taught me was about bouncing back after a failure. I remember once getting really depressed about my playing. I thought to myself, ‘No matter how much I practice, no matter how good I get, there will always be someone better than me.’
In the end I found an answer to that one: ‘Just because we can all speak, doesn’t mean we all have the same thing to say.’
I learned it’s not about being ‘the best’, it’s about acquiring the skills to communicate what’s inside you. What you learn when you practice your scales and exercises is the technique of your instrument. You’re learning how to speak the language of music. Same with learning the craft of writing. But once you’ve learned how to speak in your craft, you alone decide what you will say.

And lastly, if you had to spend a year on a desert island, what four ‘must haves’ would you take with you?

Thanks again for having me, Jo! Happy writing!

Cottage in the grounds of Lanhydrock. #Cornwall #septemberholidays

Cottage in the grounds of Lanhydrock. #Cornwall #septemberholidays
Here today for afternoon tea but couldn't resist taking this photo of the hotel's Moroccan/Mediterranean themed restaurant
Dining Room Display The Catherine Wheel, Marshfield
Spent a few hours here today. Long queue for house so wandered around the wonderful gardens still full of colour...
Dinner at The Old Ferry Inn Boddinick then back on the ferry to Fowey #fabulousfood #Cornwall #holiday
Loading Comments...
%d bloggers like this: