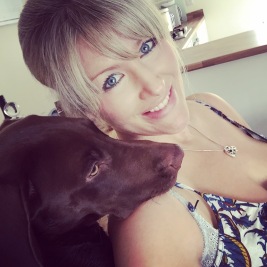 Good morning Lisa and welcome to Tuesday Talk. First of all congratulations on being short listed for Choc Lit’s 2016 Search for a Star. To kick off the interview can I ask you to tell us a little about yourself.

Hi Jo, and thank you for inviting me to Tuesday Talk! I was born in Cheltenham but moved to a little village called Bussage, near Stroud, when I was fourteen months old. My Dad was from Slad, where Laurie Lee grew up and Cider with Rosie is set. I had an idyllic childhood growing up in the Cotswolds, dancing around maypoles and riding ponies until I returned for schooling in Cheltenham as a teenager. My first encounter of an author was Jilly Cooper who lived in Bisley, the next village to us. My Dad would take me for summer walks (he was a photographer, always after his next best shot) and he used to chat with ‘Mrs Cooper’ over her garden wall. It wasn’t until some years later I realised how famous Mrs Cooper was! I have three sons; Hamish, 13, Archie, 10 and Laurence, 7 who is named after Laurie Lee (as my Dad was Godfrey and I couldn’t bring myself to name any of the boys after him!). I have been married to my Superhero, Matt, for two-and-a-half years and I carry out the admin and accounts for his electrical firm. Before I met Matt my career was in property which is where I drew much of my writing inspiration to begin with. We have a bonkers Vizsla x Weimaraner called Sparky who I enjoy taking for country walks even though he has a propensity to go missing!

When did your writing journey begin and what was the trigger?

I have always been a book worm. When I was a child my favourite series were The Worst Witch and Sweet Valley High but GCSEs, A-Levels and then College kerbed my appetite for reading and it wasn’t until Hamish was born, when I was twenty-three, that I really got into reading romance; lots of breastfeeding gives you plenty of time to read! I enjoyed writing stories at school, I was always writing up little books of some description or other (mainly about horses) but it had never occurred to me to write a novel until I started reading romance. At first I would find myself coming to the end of a novel and continuing the plot in my head. Then, when my first marriage became an unhappy one, I would imagine myself as the heroine in my own novels, a lot of the time with Sean Bean as the hero. The threads of stories came together and I decided after Laurie was born to take up creative writing evening classes. I joined the RNA New Writers Scheme in 2011 and have written three full novels in my time as a member.

Who are your favourite authors and did any of them inspire you?

Anyone who knows me will know how star struck I am by Jill Mansell. I don’t even try to hide it. If we go back to the breastfeeding period for a moment, that was when I discovered her novels. It was in 2003 and she had a decent back catalogue even then. The first novel I read of hers was Head Over Heels and I fell in love with her writing, her characters and her sense of humour. A few years later I read an article in a newspaper about her writing career and realised that if Jill could go from being a medical professional to being a bestselling author then there was no reason why I shouldn’t try either (although I’m still trying!).

What is the best part of writing for you? And the worst?

For me, it’s when the unexpected happens. I love coming up with characters and a setting (I even draw a picture of the town or village where my characters live) but it’s when I start writing and the characters come to life and do something, make a decision or act differently to how I expected, that I really enjoy the writing process. My worst has to be editing. I wish I didn’t but I find it hard to juggle so many plates in the air. Although my good friend and Choc Lit Author, Alison May, has helped me with coping strategies i.e. not trying to edit everything at once. Now I do one read through to deal with plot issues, a second read through for grammar and spelling then a final read through for anything I miss. Hence why it’s my worst; it seems to take so long!

How do you spend your chill out time?

Well, funnily enough, writing is my chill out time. We recently went to Corfu and I spent most of my time sunbathing and writing! With three lively boys and an even livelier eight-month old puppy there is precious little chill out time and writing is creative for me; I find it therapeutic.

What is your favourite holiday destination?

Ashamedly, I am thirty-six and have only been abroad four times (this is what happens when you spend your twenties reproducing), something I intend to rectify as the children get older. However, I am quite a home bird. I am very lucky to live in the Cotswolds; sometimes an afternoon out can feel like a holiday. My favourite holiday destination has to be Devon and Cornwall. We are off to Cornwall again later this summer, to Port Isaac where Doc Martin is filmed (another favourite of mine).

If you were able to go back and live in any historical time period what would it be and why?

I think it would have to be the 1920’s. Women’s appearance and independence changed dramatically during this era and it would be amazing to experience (not to mention all the wonderful couture and dancing!).

You can catch up with Lisa on her Social Media Links