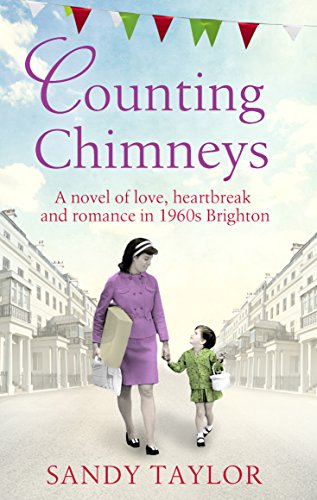 I was really looking forward to Sandy Taylor’s second dip into the life of Dottie Perks via Counting Chimneys. Once again we were reintroduced to her quirky family. I particularly love her dad Nelson who grumbles his way through life, not really coping with all the social changes of the sixties – or being able to do anything right at home. Sister Rita is now a mother and has moved to a semi- on one of the new estates. Rita so much reminded me of Bob Ferris’s wife Thelma from TV’s ‘The Likely Lads’ – a girl who was keen to make all the right impressions and distance herself from her working class roots.
As the story begins, it’s now 1969 and Dottie is happy in her job working for a magazine in London. She flat shares with Polly who has become her new best friend. A family christening takes her home and brings her face to face with Ralph Bennett, the boy who broke her heart. Ralph’s daughter Peggy is now five and he is engaged to be married to the very pretty Fiona. When Dottie learns they are about to emigrate to Australia she begins to question her feelings about her current happiness and about Ralph.
I won’t go into any more detail, other than to say Sandy has introduced us to a whole new raft of great support characters who are carefully wrapped around Dottie and Ralph’s story. This book is as good, if not better than The Girls from See Saw Lane and is a definite must read for those who love a good family saga/romance. There are lots of twists and turns, laughter and tears before you reach the end but it’s a fabulous story and written true to the times.
Although this is without doubt another well-deserved five star read, there was one personal niggle for me and that was Ralph and what eventually happened after Dottie returned to Brighton. I simply couldn’t forgive him and sadly it coloured my view of his character for the rest of the book.

This review has also been posted on Amazon and Goodreads….