Today Tuesday Talk is hosting writer Trevor Belshaw.  I put a few questions to him about his writing journey and there’s a chance to read all about his latest book Unspoken

When did you decide you wanted to be a writer?

I’ve always wanted to write, ever since I was a kid. I used to write silly, plays that I would perform with my brothers in front of my long-suffering parents, after tea on a Sunday. I wrote a few stories back then, mainly about Spaceship munching aliens, or kid’s who get stuck in various places, like haunted castles and have to trick the ghosts into letting them out.

I didn’t really get going with it until around 2008-9 when the financial crisis struck and my one-man band, computer repair business took a major hit. I was left with a lot of time on my hands so I thought there’s never be a better time to see if I could actually turn out something readable. When the business folded, I took a part time delivery job which meant I had most afternoons and all weekends free. For once, I took advantage of the situation and to my own surprise as much as anyone else’s, I became a fully-fledged writer.

How did you go about taking those first steps?

I had a go at writing a YA novel, got three chapters in then printed it off and read it back a few days later. When I compared it to an actual published book, I could see straight away that what I had produced wasn’t going to make it to the top of the book charts. The story was good, the plot was fine, but the actual prose wasn’t much better than I had written as a child. A lot of he said, she said, he did this, she did that. There were different tenses in the same paragraph, the punctuation was awful and even though the missus smiled at me and said, keep at it, (she was always honest and would never have said it was great when it wasn’t,) I knew I needed help.

So, I joined an online writing community called, Writelink where wannabe writers could post up their latest output and get genuinely helpful and friendly, feedback. Nothing was ever torn to pieces in front of you. I met some wonderful people on that site and many are friends to this day. Their advice was invaluable and within a few months I was turning out articles and short stories that were as good as most things on the site. I met my soon to be editor, Maureen Vincent-Northam on Writelink and she still edits everything I turn out, including my new novel, Unspoken. In fact, it was Maureen that came up with the title. My Tracy’s Hot Mail novels were spawned on Writelink. I used to post a new chapter email chapter on there every other week.

Before long, with a growing confidence, I began to send out articles, poetry and short stories to magazines and anthologies. I was lucky enough to have many of them accepted. So, taking the bull firmly by the horns, I began my first novel, a children’s book which developed into an eight-title series, called Magic Molly.

Has there been any one author who has influenced your work?

I’d like to say, Roald Dahl or Enid Blyton as I’ve been favourably and somewhat, flatteringly, compared to both. If I do have an author mentor, it’s probably Leslie Thomas, author of The Virgin Soldiers amongst many other titles. Leslie could make me laugh out loud and have me sobbing into my sleeve on the same page, sometimes in the same paragraph. He was a literary genius who’s understanding of humour and pathos goes pretty much unmatched … Apart from a certain Tom Sharpe who had me doubled over with laughter every time I picked up one of his books. I could read them a dozen times and still find them funny.

Amongst children’s writers I loved Arthur Ransome, (Swallows and Amazons) And Richmal Crompton. (Just William.) Both wrote about eras before my time, but the stories were timeless so it didn’t matter.

If you weren’t a writer is there any other occupation that would interest you?

At school, I wanted to be an archaeologist or a private detective. Back then neither were a possibility for a young lad from the slums, despite a lot of Private Investigators in novels being from the wrong side of the tracks. I needed a job when I left school, university wasn’t done back then for kids like me and archaeology was a rich kid’s unpaid pursuit.

What are you reading at the moment?

Having just written a Family Saga and about to continue the series, I’m reading a couple of books in the same genre to get a proper feel for it. Pam Howes. The Liverpool Girls is on my Kindle at the side of my bed. I’m also determined to re-read The Book Thief by Markus Zusak. It became an instant favourite with me on first reading.

Have you another writing project in the pipeline?

I’m four chapters into the sequel to Unspoken. Unspoken 2. Martha, which continues the story of the fractious, Mollison family. I hope to produce a third which will be titled, The Pearl, a reference to another of the main protagonist’s children, Marjorie. The name means, pearl.

What advice would you give to would be authors?

Keep at it, don’t expect your first attempts at writing to be a blazing success, even if your friends and family tell you you’re the next Jane Austen. They are just being kind and don’t want to hurt your feelings. Get your work assessed by other writers, join a local writer’s group and read your work to them. Enter competitions for short stories. Don’t try to run before you can walk. Remember, only a tiny percentage of submitted books are taken up by traditional publishers. Don’t be scared, or ashamed of Self Publishing your work. You will need to work hard to get it noticed but if you do, you’ll earn much more than by going with a small publishing company who will pay you half of what you can make on your own, and you’ll have to do all the publicity work anyway as they won’t have the budgets to help you.

And lastly, the fun question. Name three things you would like to take with you if you were planning to spend a year on a desert island.

My collection of Maria Callas CDs, so I would need electrical power to plug in the Hifi that I’d have to take with me. Failing that, my mobile phone and a wireless, Bluetooth speaker. I’d also take my book-stuffed, Kindle and a solar charger for both kindle, speaker, and phone.

Thank you for hosting me Jo.

Thank you coming along to chat Trevor… 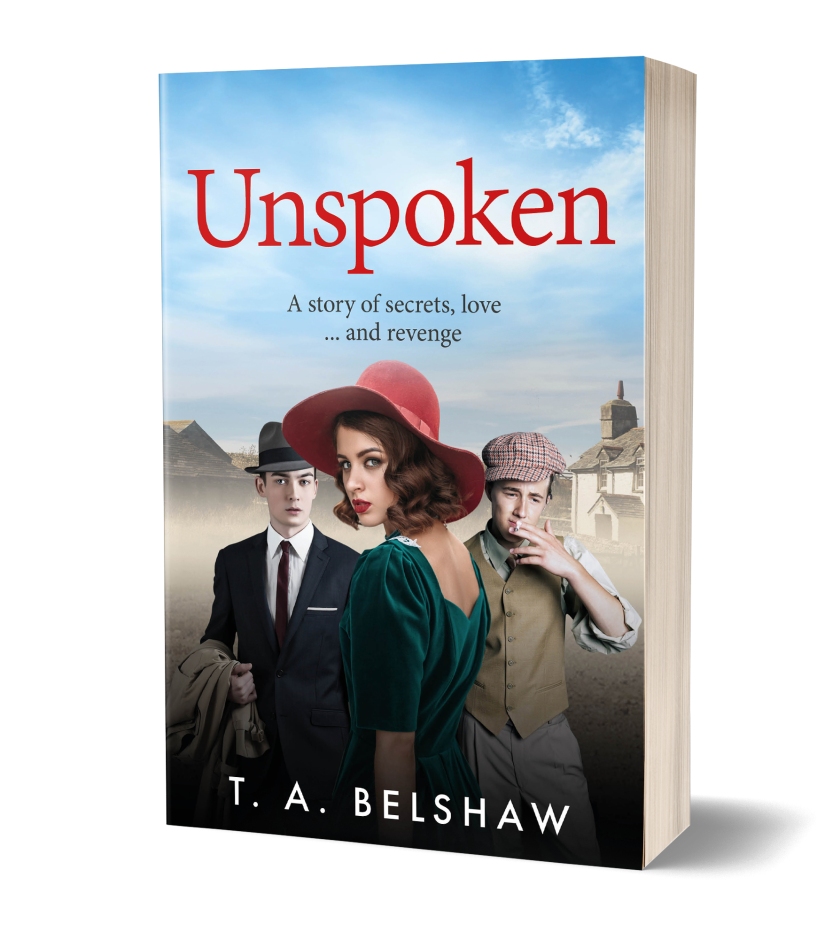 A dramatic family saga, Unspoken is a tale of secrets, love, betrayal and revenge.

Unspoken means something that cannot be uttered aloud. Unspoken is the dark secret a woman must keep, for life.

Alice is fast approaching her one hundredth birthday and she is dying. Graphic dreams of ghostly figures pulling her into a tunnel of blinding light become more vivid and more terrifying. Alice has only a short time left and is desperate to unburden herself of a dark secret, one she has lived with for eighty years.

Jessica, a journalist, is her great granddaughter and a mirror image of the young Alice. They share dreadful luck in the types of men that come into their lives.

Alice shares her terrible secret with Jessica through a set of handwritten notebooks detailing her young life during the late 1930s. Following the death of her invalid mother and her father’s decline, she is forced, at 18, to run the farm. On her birthday, she meets Frank, a man with a drink problem and a violent temper.
When Frank’s abusive behaviour steps up a level. Alice seeks solace in the company of her smooth, ‘gangster lawyer’ Godfrey, and when Frank finds Alice in another man’s arms, he vows to get his revenge.

The UK version is linked below.  The paperback version will follow soon…

T A Belshaw is from Nottingham in the United Kingdom. Trevor writes for both children and adults. He is the author of Tracy’s Hot Mail, Tracy’s Celebrity Hot Mail and the noir, suspense novella, Out of Control. His new novel, the family saga, Unspoken, was released in July, 2020

His short stories have been published in various anthologies including 100 Stories for Haiti, 50 Stories for Pakistan, Another Haircut, Shambelurkling and Other Stories, Deck the Halls, 100 Stories for Queensland and The Cafe Lit anthology 2011, 2012 and 2013. He also has two pieces in Shambelurklers Return. 2014

Trevor is also the author of 15 children’s books written under the name of Trevor Forest. The latest. Magic Molly: The Curse of Cranberry Cottage, was released in August 2016

His children’s poem, Clicking Gran, was long listed for the Plough prize (children’s section) in 2009 and his short poem, My Mistake, was rated Highly Commended and published in an anthology of the best entries in the Farringdon Poetry Competition.

Trevor’s articles have been published in magazines as diverse as Ireland’s Own, The Best of British and First Edition.

Trevor is currently working on the sequel to Unspoken and the third book in the Tracy series; Tracy’s Euro Hot Mail.

IF YOU WOULD LIKE TO PROMOTE YOUR BOOK OR JUST COME ALONG FOR A TUESDAY TALK CHAT THEN SIMPLY DROP ME AN E-MAIL AT  taurusgirl185@gmail.com