Good morning Keri and welcome. Can I start, as always, by asking you a little about yourself?

Thank you for the welcome, Jo, and for inviting me to take part on your blog.
I am the author of the suspense thrillers, Dead Letter Day and Dead Write, which are part of the Rebecca Angell series, and standalone murder mystery, The Darkness Beneath, and I am based in Norfolk, England, where I live with my two adorable, but naughty, kitties, Ellie and Lola. When I am not writing, I enjoy pub quizzes (I am horribly competitive), dinner parties, chilling in leafy beer gardens, and anything ghostly. (I’m not a firm believer, but find the subject matter fascinating). I also write lifestyle columns for two local magazines.

I was fairly shy at school and daydreamed my way through all of my lessons. Outside of school I lived in a world of movies and books. As I never really wanted to do anything other than write I found myself at fifteen years old with no career plan. Over the years I have been many things, from a video rental store assistant to the world’s worst hairdresser (seriously, you would be better off letting Edward Scissorhands loose on your locks), an entertainment agent, a caricaturist and a contractor for a travel firm. The one constant through all of these jobs was a love to write.

I wrote my first novel at age twenty and bombarded every publisher and agent I could find. This resulted in several flat out rejections, but some gave encouragement telling me I had potential and to persevere.

Four more novels followed and a few more rejection letters. Along the way there was a brush with an unscrupulous publisher, a break with a top agent and an almost deal with one of the big guns. This ended with another blowing rejection and I quit my dreams for a while, convinced they were over. As I grew older and blonder (it covers the grey nicely), I swapped books for cats and red wine, though the urge to write never left.

Then five years ago I entered the Rethink Press New Novels Competition. I almost didn’t enter, as I lost two thirds of the Dead Letter Day manuscript from my computer and only had a paper copy. Taking a chance I submitted the first 10,000 words and rallied family and friends to help type the rest of the book. The efforts paid off and my novel won a publishing contract, and I took away two important life lessons from the experience. Never give up on your dreams and always use back up discs. 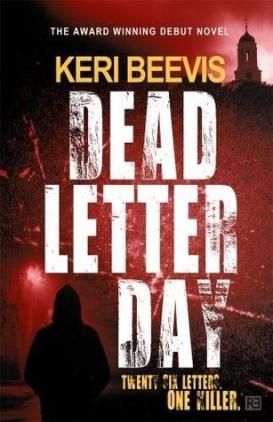 I was a voracious reader when I was younger and Enid Blyton stands out as a particular favourite. I loved the Faraway Tree stories and also the Adventure series. Black Beauty also holds fond memories. It wasn’t until I was a little older that I realised Anna Sewell had lived just down the road from me.

Name two authors who have influenced your writing. What is it about their work that made such an impact on you?

I guess the first would have to be Stephen King. I remember reading The Shining when I was fourteen years old. I was on holiday in Cyprus and it was the middle of a gorgeous sunny day when I first read about Room 217. That scene was subtly written, yet so scary I actually had to put the book down for a moment. It has stayed with me.
A few years later I was reading Misery (again on holiday) this time thinking how difficult it must be to write a full novel. At that time I was focusing on short stories and submitting them to magazines. By the time I had finished the book and headed back to England I had decided I wanted to try my hand at writing a novel. I completed my first attempt six months later.
The second author I consider to be a big influence is Tami Hoag. I love horror, but psychological suspense is my preference. The first Tami Hoag book I read was The Thin Dark Line. I couldn’t put it down and knew immediately that this genre was where I fitted as an author.

Beach or city girl? Where are you happiest and what is your favourite destination?

I love the coast and the countryside far more than I do the city, though I do adore my home city, Norwich. In my home county, my favourite place would have to be the North Norfolk Coast and I love Holkham and Wells-next-the-Sea. My late dad’s home-town of Long Melford, on the Suffolk/Essex border, also holds many fond memories. Further afield my favourite destinations are Italy (I love everything about this country; the food, the history, the scenery, the culture) and Crete (possibly the friendliest, most welcoming people, and the sunsets are spectacular).

I am currently working on my fourth book, another standalone psychological thriller.
The story’s protagonist is Lila, who is the sole survivor of a horrific car accident. She has no recollection of the accident and, as she starts to piece her life back together, a couple of unsettling incidents suggest that someone may want her dead. Can she figure out whom, why, and what happened the night of the accident, before it is too late?
Although I am British my first three novels were all US based, but this one I am planning to set in my home county of Norfolk, England. This will be a challenge as I need to un-Americanise my writing, plus I have a lot of US readers, so I am hoping they will stay with me.

And last of all – the castaway question. You’re taking yourself off for a year on a desert island. What four essential or luxury items would you take with you and why?

Now I could answer this question practically and say razor, clean underwear, etc., or be indulgent, and I am going to go for the latter. My bed, because I could not go a year without it, wine and coffee (for obvious reasons), plus music. IPod or radio, I don’t mind, but I couldn’t go for a whole year without music.

Keri Beevis wrote her first novel at age twenty, but it was a further twenty years later before she finally found success after entering the Rethink Press New Novels Competition 2012.

Her entry, Dead Letter Day, was a winner, earning her a publishing contract with Rethink Press and the book proved to be a hit, both critically and publically, with the Eastern Daily Press saying the book was ‘Exciting, gripping and tantalizing’, while Iceni Magazine called it ‘Brilliant from start to finish’.

The sequel to Dead Letter Day, Dead Write, which sees the return of Rebecca Angell, was released in 2014, and again received rave reviews in the local press.

Keri’s third novel, creepy mystery thriller, The Darkness Beneath, is a standalone story that was released in December 2017.