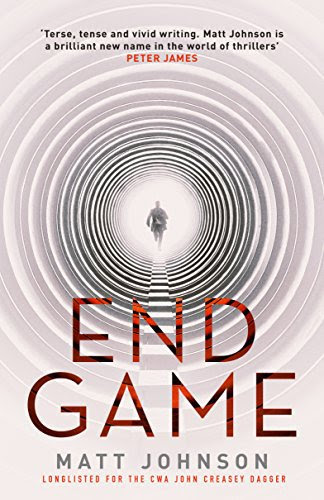 Robert Finlay seems to have finally left his SAS past behind him and is settled into his new career as a detective. But when the girlfriend of his former SAS colleague and close friend Kevin Jones is murdered, it’s clear that Finlay’s troubles are far from over. Jones is arrested for the killing, but soon escapes from jail, and Finlay is held responsible for the breakout.
Suspended from duty and sure he’s being framed too, our hero teams up with MI5 agent Toni Fellowes to find out who’s behind the conspiracy. Their quest soon reveals a plot that goes to the very heart of the UK’s security services. End Game, the final part in the critically acclaimed Robert Finlay trilogy, sees our hero in an intricately plotted and terrifyingly fast-paced race to uncover the truth and escape those who’d sooner have him dead than be exposed.

First can I say I’m really pleased to be part of this tour courtesy of Orenda Books and Anne Cater.  Many thanks for invitation and the ARC copy for review.

Thrillers aren’t my normal choice but the ones I have read in the past I’ve enjoyed. End Game is no exception. Although the final instalment of a trilogy it is easily read as a stand alone novel.  From the moment I began this, the whole story pulled me in. It’s well written, and the pace never slacks, delivering an exciting read which keeps you on course, not wanting to put it down until that final page has been read.  A great plot with twists and turns aplenty. Intense and nail biting, having to set it aside for more domestic aspects of life at times left me quite frustrated.  A great book which left me thinking  I really ought to check up on Matt Johnson’s previous two novels –  WICKED GAME and DEADLY GAME.