Good morning Ali and welcome. Can I start, as always, by asking you a little about yourself?

Hello again, Jo and thanks so much for having me. As you know I live not for from you and have done since my marriage many (many!) years ago. However I was born and brought up in Scotland where I got my degree from St Andrews University. I love the West Country and my family (one of each) have grown up here, but of course you take the Scot out of Scotland but you can’t take … you know how it goes!

Well, now you’re asking! I wrote a poem at school when I was six (didn’t we all) and joined the sixth form creative writing course (considered very new fangled back then) but I was in my fifties before I realised I hadn’t started the writing journey I had always meant to embark on. Even then there were a few false starts until I found a brilliant teacher in novelist Sarah Duncan who was running an evening class in Bath at that time. That was it – I was off!

Are you a panster or a plotter?

Very much a pantser. Although I do always have an idea of what it’s all about and where it’s heading, I have to work out the rest as I go along. Finding the story is part of the process for me and I really struggled in my current project. It’s historical fiction and I thought having a ‘ready-made’ plot would make it easy but the opposite was true. Because the main story was already known to me, I had to winkle out more stories hidden within it.

Name the top two destinations on your bucket list.

I’m lucky to have been to quite a few of my dream destinations, as far east as Dubai and as far north as Lapland, but I’m finding now that places are dropping off my bucket list. I don’t need to see the whole world before I die, but I would still like to make it to Orkney and the Western Isles. This summer we hosted children from Belarus – still affected by the Chernobyl disaster (more info at https://www.ccll.org.uk/bristol/index.php?ctlPage=home ). Not exactly a tourist destination, but it has made me very curious about life in that part of the world.

What was the inspiration behind A Kettle of Fish?

My first (unpublished) novel was set in Bristol and France. After a trip to Scotland, where 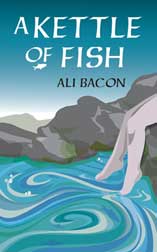 we hadn’t been for quite some time, Kettle was a conscious decision to celebrate my roots. I loved writing about the villages of the East Neuk of Fife and the magnetic pull of Edinburgh. But Kettle is contemporary, not set in my childhood. The themes of family secrets and a brush with the art world just seemed to appear of their own accord. It was fun to write and took me to some unexpected places – including the subject of my forthcoming book, In the Blink of an Eye, due out next year with Linen Press Books http://linen-press.com/

What’s next? Can you tell us a little about your latest project? 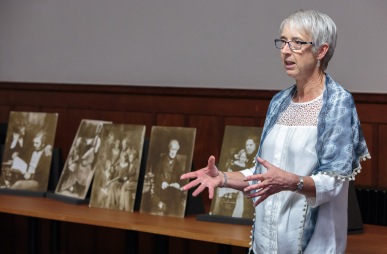 In the Blink of an Eye is a fictional account of the Scottish artist and photographer D. O. Hill. In 1843 Hill began a monumental painting of around 400 Scottish ministers which took him 23 years to complete. The book looks at what happened in between, including hill’s iconic partnership with photographer Robert Adamson. Together these two men created 3000 photographic images many of which are still regarded as masterpieces. In the end (see above!) I told Hill’s story in the voices of ten different people whose lives he touched. This seemed the only way to convey the breadth of his influence. In doing so, different facets of Victorian Edinburgh come to light.
Writing the book is part of a mission to being Hill and Adamson’s work to a wider audience and, once it’s published, I’m planning to give presentations about them to anyone who’ll have me!

And lastly, you’re planning a dinner where you can invite four celebrities (past or present). Who would they be and why?

Hah! I remember in the past choosing the geneticist Steve Jones, the politician Shirley William and tennis star John McEnroe. I must be getting shallow in my old age as I am replacing Jones with Daniel Craig (for obvious reasons!) Instead of Shirley, since I can’t have the entire cast of Dinner Ladies, I’ll have the incomparable Victoria Wood. Tennis must be represented by my all time hero Andy Murray and I’ll add the writer Kate Atkinson, whose conversation is sure to be as dazzling as her writing. Oh dear, I hope they get on!