Sorting through old photographs recently I came upon some of the cars we had owned over the years.  My OH is particularly fond of his four wheeled friends.  Not only does he love driving them, they are looked after like babies.  When trading in on one occasion, the dealer told him the car was in better condition than when he had sold it to him.  A tongue in cheek comment, of course,  but it does indicate the TLC which each of these vehicles receives while in his possession.

When I first met him in 1981 he was driving a soft top Triumph Spitfire.  Great for those Thelma and Louise moments, letting the wind whip through your hair as with accelerator to the floor you bomb along the open road.  I’ll rewind that comment – great if you have long hair, not so good if like me, your hair is short, fine and difficult to manage.  The sort of hair that involves a lot of work getting just right before you go out.   The sort of hair that had me looking as if I had spent half an hour in a wind tunnel after even a short journey in this car.

When the next car change was due we both agreed it might be better to have something with a fixed roof.  Bring on the Ford

Fiesta XR2. Actually it was a Fiesta Sport, slightly different from the XR2  -please don’t ask me how as I have no idea! It was red and fast, the only downside being the sunroof was fixed.  No manual wind back or electrics to open it completely – it had to be  removed.  No problems unless that unexpected shower of rain arrived. It was then a case of pulling over and slotting it back into place – very quickly.

Car changes in our house are every two years and the next purchase was a Ford Escort XR3i. This was a great car and XR3i’s were extremely popular in the 1980s when Ford could do no wrong and Audi and BMW did not have the broad market share in the UK they do today.  He liked the car so much that two years on he replaced it with another, newer version.  Sadly, however, this did not live up to its predecessor and left him rather disappointed.

By the late 1980s he left Ford and entered his Citreon phase.  The Citreon AX was a small hot hatch and in the passenger door there was a slot for a wine bottle. This meant en route to friends for

dinner the accompanying plonk could be stored safely – those French think of everything!  The love affair with Citroen continued into the early 1990s with the purchase of the slightly larger ZX which became a favourite of both of ours – a lovely car to drive. 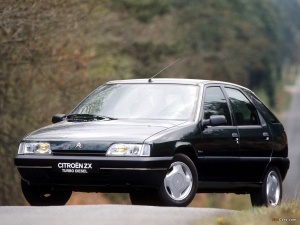 The Citroen dealership closed in 1993 and reopened selling Fiat.  The ZX was traded in for a Fiat Punto.  Even though we purchased the GT version I always felt this a bit of a lacklustre car, we both hated driving it and it only stayed with us for 12 months.  It was replaced by its larger sister, a Fiat Brava – which made us revise our opinion of Fiats.  A great car to drive. However the arrival of the Focus in 1998 found us back with Ford again.

After the Focus came a Saab 9000i and a BMW series 1. The latter, being rear wheel drive, made it almost impossible to get out of our hillside road when we had snow causing OH to spit feathers and declare he would never buy this model again.  And then came something very special – the Alpha Romeo 147 -his ‘Italian Job’ and one he still talks about today and says he misses. It was a fabulous car both in looks and performance.  A brown and silver Mini Clubman followed two years later – a great car apart

from the strange little half door on the driver’s side to enable rear seat passengers to shoehorn themselves in and out of the car. Unfortunately  even with the driver’s seat tilted and pushed forward, the gap was incredibly small.

And finally we come to the current love of his life – yes despite his declaration he would never buy another one, we have a BMW Series 1 which has been with us just 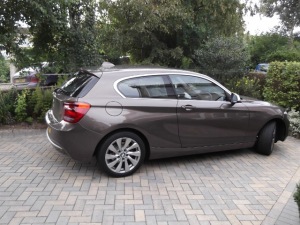 over 18 months now. It’s is his first car with an automatic gearbox too, something he says he wishes he’d gone over to years ago as it makes driving a much more enjoyable experience.

For years OH had thought about building a car and I trekked around the UK to a lot of kit car shows with him as he tried to make his mind up exactly what his project would be.  By the time we reached the mid-nineties, the thought of having to dispose of unwanted bits of  donor car plus having the garage piled up with parts and a chassis pushed him into what he saw as a better alternative: buying an older car to restore.  His first purchase was Ruby, a red Mini 30 bought from an octogenarian whose daughter felt he was no longer safe behind the wheel. I remember it having

a resident spider complete with web in the back window and a new offside wing (badly sprayed) where he’d collided with something he couldn’t quite remember.  Over the next few years an extraordinary amount of time and money was lavished on this car.  Not only was it brought back to its ‘as new’ state but additions like cloth fold back sunroof and walnut dashboard were added. And then as with a lot of love affairs, the interest waned and he decided he wanted a new project.  Ruby was sold on Christmas Eve 2012 to a young guy back in the UK on festive season holiday break from his job in Germany.  I was sorry to see her go.  Although I find the original Mini ride is a bit like driving with your backside on the road, this was such 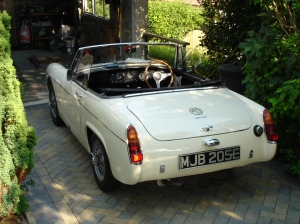 an iconic little car.  Now, we’re back to another soft top – an MG Midget – which I’ve yet to belt myself into despite a pop up mesh wind shield being fitted.  So will I take the plunge?  Well after all the trouble and expense my OH has gone to for me it would be mean not to wouldn’t it?  Watch this space!

3 thoughts on “THE CAR’S THE STAR”

#Cornwall #goodmemories #staycation
Great to see everything looking so much greener #spring #woodland #sunshine
Sunset in the woods across the valley this evening
Quince now in flower in the garden.
Can't wait to get some bedding olants in to give the garden some colour #springtime #gardening
Blossom everywhere...
Loading Comments...
Comment
×
%d bloggers like this: