Heavens, Christmas is waiting in the wings, although it seems to me festive TV ads have been flitting across our screens since mid-October (or was it earlier?) Anyway there are now four more shopping weekends until the great event and I’m trying very hard not to panic.  The trouble with  not working is that – for me at least – if I have less to do, being organised ends up in free-fall.  When I was in the world of work most of my jobs were pretty full on.  I think the busiest I ever had was when I was in my late thirties.  I worked for the NHS within their Community Health Unit which looked after services like Child Health, Family Planning, Services for Children with Learning Difficulties, Chiropody, Dentistry and Speech Therapy.  My job, besides acting as PA to the Unit General Manager, saw me managing 9 secretaries, two admin staff and keeping 112 community vehicles on the road.   Yes it was pretty busy but I found the more I had to think about, the better organised I was.  For me, work has never been enjoyable unless there was a challenge and boy was that one of my biggest!

Now I no longer have responsibility for anyone else, just me – and my OH of course.  I do find with no time constraints apart from writing, things tend to fall into mañana mode – a sort of ‘Oh I’ll do that tomorrow‘ approach. Although after years at work when maybe I should be taking my foot off the gas, I do really feel the need to maintain some sort of organised existence within my new self-employed world.  However as far as Christmas is concerned I’m afraid I’ve failed miserably.  No cards yet, no gift purchases either, although I have managed to put one or two items of festive food by.  Never mind, I’m promising myself this week will see a total change.  Cards will be purchased and written ready for posting during the first week in December.  Then the week after a day out Christmas shopping followed by the purchase of the tree, decorating and then bracing myself for all the run up to Christmas socialising that normally takes place.

Well I’m stopping and thinking now. After sharing this with you all maybe, just maybe I’m beating myself up just a little over this.  There are still elements of my former self in this new life of mine – a  methodical approach to writing for a start. And on the kitchen front I’m well organised with weekly menu plans and grocery lists.  Then  there’s an appointments diary for dentists and all other necessaries and lastly an up to date list of friends to dip into to organise lunch meets.  So if I’m not quite ready for Christmas then it seems my day-to–day existence still appears to run quite smoothly does it not?  Although it’s not as busy as I used to be maybe on reflection I should take comfort from that.  Because if I had to drop myself back into the skin of a thirty something now and do all the things I used to do in that job, working full time as well as running my home and writing I’m sure the men in white coats would soon be beating a path to my door.  That was then, this is now, so maybe I should both embrace and enjoy my new ‘liberated state’ as one of my friends once termed it!  After all, I’ve earned it haven’t I?

And returning briefly to Christmas, I’m finishing with a plug for my favourite city’s forthcoming festive market

For 18 days, the quaint streets and square between the stunning Bath Abbey and the internationally renowned Roman Baths are transformed into a Christmas shopper’s haven – Bath Christmas Market.

The opening times for the market this year are:

In the heart of Bath’s main shopping district, more than 150 traditional wooden chalets adorn the streets; each one offering unique, handmade and unusual gifts, decorations and food items – everything you will need for the perfect Christmas celebration.

The SHINE ON Award

7 Random Things About Me

I’m proud to be the recipient of the prestigious SHINE ON Award in the ‘books inspired by music’ category. In order to accept the honour bestowed upon me by fellow Canadian writer Melanie Robertson King, I have to share seven random bits of information about me with you – my readers.  So for better or worse here they are:-

One)  I’ve been married twice and both my husbands have the same star sign – Pisces.

Two) I have never changed my initials.  No, it’s not that I preferred to keep my maiden name after marrying, both my husbands just happened to have surnames beginning with the same letter as mine.  As a child I owned a small brown case which had belonged to my father and had his initials  – which incidentally were the same three as mine – set into the lid.  I remember telling my grandmother on more than one occasion that these initials were never going to change, I would always have them.  This pronouncement, however, had absolutely nothing to do with eventual my choice of husband. A little spooky though, don’t you think?

Three) I sat next to Jamie Cullum in the cinema.  It was a long time ago at the beginning of his career; he was with his family and I remember he demolished a very large tub of popcorn through the film!

Four) I have a complete aversion to men’s ginger suede shoes. Not wanting to go too deeply into this, but years ago when I worked in Bristol for an international building company one of the guys in the office behaved in a way to women that would absolutely not be allowed today – and got away with it.  He wore ginger suede shoes and every time I see anyone wearing anything remotely similar, it brings back memories of that particular office predator.

Six) I adore cats. I’ve owned 8 at different times in my life. My favourite has to be Ziggy, a half Burmese boy who became diabetic at the age of 10 and had to be put to sleep two years later when insulin shots failed to control the disease.  A great loss, miss him very much – he was almost human! 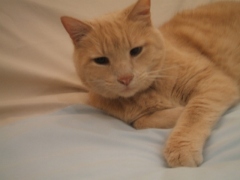 Seven) Like Melanie I could not exist without chocolate.  It’s my absolute downfall as I can definitely identify with ‘a minute in the mouth a month on the hips’ . I do tend to damp down on my sweet tooth, only indulging at Christmas.  Now if they could make a low calorie chocolate that tasted like the naughty variety I’d be in absolute heaven!

So that’s it, seven random things about me. Read Melanie’s SHINE ON random personal facts on her Celtic Connexions blog found via: www.melanierobertson–king.com

I have to confess this SHINE ON award has been so popular that most of the writers I know have already opted to join under someone else’s banner.  Therefore I am only able to pass the baton for this award to my good friend and writing colleague Kit Domino, Writer and Artist, Author of Every Step of the Way.  However if I do manage to enlist the support of any others I will rope them in and let you all know the details.