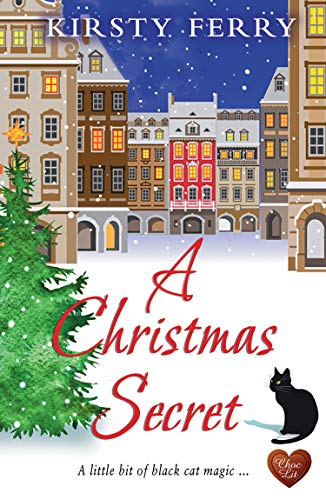 What if a secret from Christmas past was stopping you from moving on to Christmas future?

When Hugo McCreadie steps into Isla Brodie’s pet portrait studio to get a ‘Festive Furball Photo Shoot’ for his sister’s cat Schubert, he does question his sanity. But he knows the photographs will be the perfect Christmas present for his eccentric sister, Nessa – and he finds himself quite taken with ditzy, animal-loving Isla Brodie, too.

Will a Christmas secret from long ago prevent Hugo and Isla’s new friendship from going any further? Or will a certain big, black cat taking matters into his own paws lead them not only on a mad winter dash through snowy Edinburgh –but into each other’s arms for Christmas as well?

Kirsty is from the North East of England and won the English Heritage/Belsay Hall National Creative Writing competition in 2009 with the ghostly tale ‘Enchantment’.

Her timeslip novel, ‘Some Veil Did Fall’, a paranormal romance set in Whitby, was published by Choc Lit in Autumn 2014. This was followed by another Choc Lit timeslip, ‘The Girl in the Painting’ in February 2016. ‘The Girl in the Photograph’, published in March 2017, completes the Rossetti Mysteries series. The experience of signing ‘Some Veil Did Fall’ in a quirky bookshop in the midst of Goth Weekend in Whitby, dressed as a recently undead person was one of the highlights of her writing career so far!

Kirsty’s first timeslip novel ‘The Memory of Snow’, commended in the Northern Writers’ Awards, is set on Hadrian’s Wall, with the vampire tale ‘Refuge’ set on the Holy Island of Lindisfarne. She has also put together a collection of short stories, a non-fiction collection of articles and writes Gothic Fiction under the pen name Cathryn Ramsay.

Kirsty has had articles and short stories published in Your Cat, Peoples Friend, Ghost Voices, The Weekly News and It’s Fate, and her short stories appear in several anthologies. She was a judge in the Paws ‘n’ Claws ‘Wild and Free’ Children’s Story competition in 2011, 2013 and 2014, and graduated from Northumbria University in December 2016, having achieved a Masters with Distinction in Creative Writing.

A wonderful festive read. Animals in novels don’t always work, but there was something otherworldly about Schubert and the wayward feline added a touch of comedy to the story.  This is a light, sweet romance with definite Christmas sparkle.