Langlands House is haunted, but not by the ghost you think.

Augusta McAndrew lives on a remote Scottish estate with her grandmother, Rose. For her own safety, she hides from outsiders, as she has done her entire life. Visitors are few and far between – everyone knows that Langlands House is haunted.

One day Rose goes out and never returns, leaving Augusta utterly alone. Then Tom McAllister arrives – good-looking and fascinating, but dangerous. What he has to tell her could tear her whole world apart.

As Tom and Augusta become ever closer, they must face the question: is love enough to overcome the ghosts of the past?

In the end, Langlands House and its inhabitants hold more secrets than they did in the beginning…

MY INTERVIEW WITH HELEN GRANT 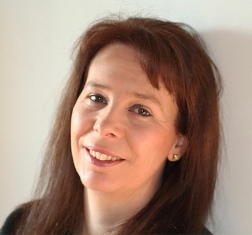 What attracts you to write about the supernatural?

It’s partly a family thing! My Dad and my middle sister both love ghost stories. When we were kids, my Dad used to amuse us on long journeys by retelling the tales of classic ghost story writer M.R.James. We had favourite ones that we were always pestering him to tell us! There was one called “Wailing Well” which really scared me when I was a kid, but I never got tired of hearing it. It was a thrill, like watching Dr. Who from behind the sofa!

As a writer, I think the supernatural offers some wonderful opportunities to explore big themes. One of my previous novels, The Glass Demon, is ostensibly about the search for a series of priceless stained glass windows haunted by a demon. However, it’s not really just about that; it’s about the dangers of obsession. I think my new book, Ghost, is about the way that any of us can be haunted by the past. Supernatural fiction can allow us to examine our fears – death, disease, mental illness – in a “safe” way; when the story ends, you can close the book. It’s somehow containable.

Who are your favourite authors and have any of them influenced your writing?

It’s so hard to choose! As well as the ghost stories of M.R.James, I love the novels of Victorian writer Wilkie Collins- they are full of astounding and colourful characters, and some of them have outrageously improbable plots. My favourite modern writer is certainly the Swedish novelist John Ajvide Lindqvist, who wrote Let The Right One In. I’ve got all of his books that have been translated into English, and I’m very impatient about waiting for the next one. I also loved Michelle Paver’s two ghostly novels, Dark Matter and Thin Air. I like the sense of menace that hangs over them, as well as the old-world feel.

You can probably detect a pattern here…I love thrilling and ghostly stories! I’m not into violent, gory horror stories. I don’t want to be disgusted but I do like my flesh to creep!

If you had a chance to write something completely different, what would that be?

Apocalypse fiction, without a doubt! I love reading it, and I love watching apocalyse movies, too. I suppose we all imagine that we would be amongst the survivors who get to wander through the deserted landscape, having adventures and helping ourselves to whatever we wanted!

It’s a favourite topic of ours at home. My daughter says that if there is ever a zombie apocalypse or superflu, she wants to hole up in Waterstones and read all the books. She’d better pick a branch with a café in it…

Where did the inspiration for Ghost come from?

When I was writing one of my previous books, Urban Legends, I started doing urbex (urban exploration) as part of the research. I went out with some experienced urbexers and visited an abandoned factory that was scheduled for demolition. It was a very exciting experience and since then I’ve had an interest in exploring derelict places.

When we moved to Perthshire in 2011, I started to research the lost country houses of Scotland, and where possible, I like to visit the sites. In the 1800s, a lot of very grand country mansions were built, and in the twentieth century these were no longer practical to maintain. Some were demolished – or even blown up! – but others are just sitting there, in the countryside, slowly mouldering away. I’ve been to see a number of these, and you very rarely see anyone else there. They are very lonely places. So I started to think: supposing there was a house like this, only it was still reasonably intact, with all the contents in it – who would be living there, and why would they be hiding themselves away like that? And that is where the idea for Ghost came from.

What makes a good heroine in supernatural fiction?

I don’t think the heroine has to fit a particular stereotype but she has to be a complex and interesting character. If you are going to put your heroine into a scary or threatening situation, it’s important that the reader can empathise with her, so that they care about what happens to her. She has to be more than just a screaming victim. I think this is true of scary films as well as supernatural fiction. The heroine doesn’t have to be perfect, but she has to feel real.

And lastly, if you were holding a dinner party and could invite four celebrity guests (live or dead) who would they be, and why?

I’ve spent ages thinking about this question. It’s so difficult to answer!

I’d love to invite Charles Dickens so I could ask him what happens at the end of The Mystery of Edwin Drood (he died before he could finish writing it). I’d also invite Wilkie Collins because I’d want to talk to him about his outrageous characters; also, he was friends with Dickens so they’d be pleased to see each other. I’d love to invite Mary Shelley, the author of Frankenstein; I’d ask her whether she had any idea how huge that book was going to be!

I’d also invite film director Guillermo Del Toro, because I would love to talk to him about his films, especially The Devil’s Backbone, which is one of my very favourites. However, I don’t know how he’d feel about having dinner with three nineteenth century writers and me…

Helen Grant’s debut novel The Vanishing of Katharina Linden was shortlisted for the CILIP Carnegie Medal 2010. In 2011 the book also won an ALA Alex Award (awarded to “books written for adults that have special appeal to young adults”). Helen’s short crime story The Beach House won the Jimmy Perez Trophy 2015 at the Shetland Noir book festival. Her work has also featured in Best British Horror 2015 (for The Third Time). Helen has lived in Spain, Germany and Belgium. She now lives in Perthshire with her husband, two children and two cats. She is currently the Royal Literary Fund Fellow at the University of Stirling. As well as exploring abandoned country houses, Helen enjoys visiting the cinema and wild swimming.